BYTON Wants to Take a Bite Out of Tesla

Daniel Kirchert, BYTON CEO, at CES with the first M-Byte produced in the photo behind him. (Image: gsv)

BYTON, the company that is preparing to produce the electric M-Byte crossover vehicle, which is probably most well-known because of the 48-inch display that goes from one A-pillar to the other, where the instrument panel would normally be, is getting close to launch, according to its CEO Daniel Kirchert.

Two years ago at CES BYTON introduced a concept version of the M-Byte, and the initial production of the vehicle is being prepped at a 8.6-million sq. ft. plant in the Nanjing Economic and Technological Development Zone in Jiangsu Province, a factory that has a 300,000-unit capacity.

Pilot production of the M-Byte occurred in October 2019.

According to Kirchert, they plan to launch in the China market in the second half of 2020, then roll out into the U.S. and some European markets in the first half of 2021.

Kirchert, in presenting the vehicle, pointed out that the traction that EVs have gained in 2019 makes him confident that they are launching their vehicle at the right time.

And while executives who are launching new EVs often allude to Elon Musk and Tesla, as though it is a bit of a wink-wink, Kirchert name checked Tesla and stated, “BYTON is ready to be the alternative.” 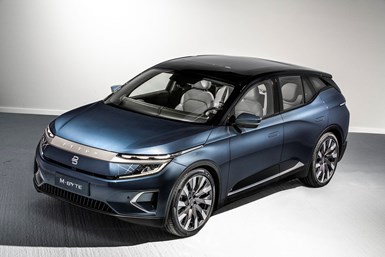 At this point, they have 60,000 reservations for the M-Byte, so arguably they have some ground to cover if they’re going to put a dent in Tesla, which is ramping mass production of Model 3s in its Shanghai plant—although it should be pointed out that the M-Byte is more of a competitor to the yet-to-be launched Model Y, so there could be a bit of a first-mover advantage in the compact crossover space for BYTON.

Kirchert and his colleagues talk less about the M-Byte as a vehicle than they do as “the first smart device on wheels.” 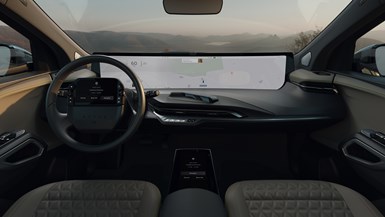 Yes, that is a 48-inch screen on the interior of the forthcoming BYTON M-Byte. (Image: BYTON)

Imagine Movies on that Screen

Because of that massive amount of display real estate—which BYTON is calling “the Stage”—the company is working with partners to provide infotainment. Among partnerships it has announced are ViacomCBS and ACCESS—which means that the TV and movie content that ViacomCBS has on its servers are going to become available to the M-Byte through the use of the ACCESS Twine for Car System—AccuWeather and several other technology providers. The company has established the BYTON Developer Program that includes its release of UX design documentation and app development guidelines so as to increase the number of offerings it can put on Stage.