The Cadillac crest had birds on it that have blackwings. And while those birds have flown from the badge, the idea of their specialness remains for the Blackwing series of vehicles
#chassis #Cadillac #body 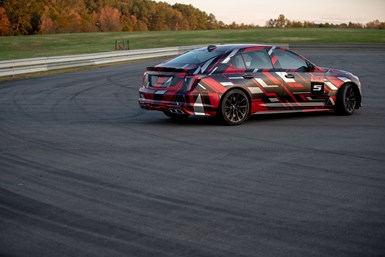 So while he wasn’t able to provide a whole lot of specifics about what it is that will “elevate” those vehicles, it is worth considering the context that these vehicles will exist in.

They are powered by a high-output 3.0-liter twin-turbo V6 engine. There are low-inertia turbochargers for improved breadth of power production. The engine is rated at 360 hp and 405 lb-ft of torque.

The cars have a 10-speed automatic transmission and electronic limited-slip differential. A standard model has RWD and AWD is available.

It has a 10-speed automatic and mechanical limited-slip diff. It is standard AWD.

So, given that, one might wonder what will be the driveline for the CT4-V Blackwing and the CT5-V Blackwing. And pretty much, one will have to continue to wonder—beyond the availability of the six-speed manual.

As Vivian explains on the show, the fundamental bones of the CT4-V and CT5-V were well suited to increasing their performance capabilities, so the Cadillac engineering team went at it, increasing those capabilities in order to build vehicles that would be track-capable—but also something that people could have as a daily driver.

After all, it is one thing to have a car that can comport itself at a high level on a track like the Virginia International Raceway—one of the venues that the vehicles were tested at, running against not only the ATS-V and CTS-V, which the new vehicles handily bested—but which someone can drive to the track (or to the store, restaurant, golf course, etc.).

Vivian emphasized that a goal at Cadillac is to develop the characteristic of “Isolated Precision” for its vehicles—presumably with the isolation going to the point of quietness and comfort and the precision underlining the steering and chassis setup, as in the car goes to where it is supposed to without fail (speaking of the chassis, it should be noted that the CT6-V has “Driver Selectable Modes” including Track Mode that provides specific steering and Magnetic Ride Control calibrations, so one can assume that the same will hold true for the new vehicles).

On the show, Vivian talks with Chris Paukert of “Roadshow,” “Autoline’s” John McElroy and me.

One of the things that Vivian mentions is the possibility that there could be a wagon version of the new vehicles, which has raised all manner of interest among Cadillac V enthusiasts (Vivian says they regularly talk with those folks). There was a CTS-V Wagon available in model years 2011 through 2014; the total number of those sold could probably be handled by a Costco parking lot. Yet Vivian’s comments have raised internet inserts (e.g., here’s how Paukert covered it). 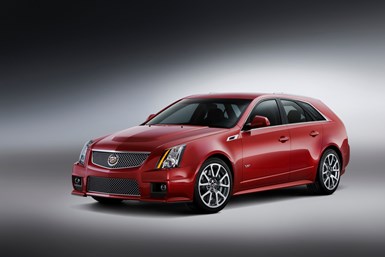 In addition, McElroy, Paukert and I discuss a variety of subjects, including the most recent Cannonball run record (26 hours, 38 minutes to travel 2,825.3 miles, coast-to-coast) set while many people were off the road due to COVID-19 lockdowns; whether exceedingly low gas prices might not lead to a resurgence of muscle cars (well, maybe a CT4-V Blackwing Wagon. . .); and the evident interest in televised e-racing.