The words have a strength and resonance:

These, says Brian Smith, exterior design director at Cadillac, are the characteristics that he and his colleagues are working to create in the vehicles that Cadillac is bringing to market. 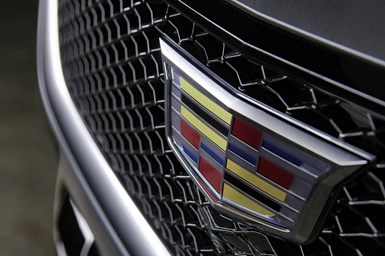 Cadillac was once known as “The Standard of the World” (this goes back to 1908, thanks to the precision and consistency of the parts produced, for those who are interested).

Over the years there have been some wonderful periods of Cadillac design (think, say, of the mid- to late-‘50s) and some periods that are best forgotten (some of the Cadillacs of the mid-‘70s had exterior styling that might as well have carried a Pontiac badge—which is props to Pontiac).

Arguably, Cadillac design is at one of those inflection points where the team is doing some extraordinary work, whether it is of production cars like the CT5:

or a future crossover, the Lyriq, a battery electric vehicle that will be the first of the transition of the brand to General Motors’ lead in electrification:

One way of looking at this is that going forward, as Cadillac makes a transition to an EV-centric lineup, the designers are being tasked with redefining what Cadillac is, yet at the same time respecting some of the products of the past that are fully definitional of the marque.

While there may have once been a focus on trying to out-German the Germans (and Smith notes that if you look at the performance comes out of the V-series vehicles, they’re more than autobahn capable), the designers are now focusing on their heritage. (It should be noted that the Dewar Trophy that Cadillac won in 1908 that gave rise to that moniker was presented in the U.K.: the American brand can compete in the world on its own terms.)

Of course, there is the question of China, where Cadillac obtains a significant amount of sales. Smith explains that pursuing a style evoking American Luxury is actually advantageous there, as there are people who are looking for authentic products. Somehow a vehicle from an American company that was trying to pretend to be something else doesn’t seem as though it would resonate.

Another consumer cohort that Smith says Cadillac is looking to address are young people—especially those in places like California—as there is a clear recognition that as companies like Tesla are attracting buyers of that demographic—who are spending a non-trivial amount of money, by the way—which Cadillac would like to number among its customer base.

Talking Desgin on Autoline After Hours

Smith is the special guest on this edition of “Autoline After Hours,” where he talks with “Autoline’s” John McElroy, Peter DeLorenzo of Autoextremist.com and me.

Smith talks about how electrification and other technology advances are changing car design. For example, the traditional grille is something that isn’t a requirement for an electric vehicle based on cooling demands; in the case of the Lyriq, the grille is more of a lighting signature element than a passive breathing device.

Other things that are likely to give way in exterior design are traditional door handles and side-view mirrors.

Smith talks about a number of subjects related to design. And while he knows that he can’t talk about future product, one future vehicle that has been announced by Cadillac that is going to be coming out at some point in the not-too-distant-but-not-too-near future is the Celestiq, a flagship model that will be hand-built, which not only will be a feat of craftsmanship, but which provides designers with the opportunity to create some extraordinary surfaces and details.

In addition to which, McElroy, DeLorenzo and I discuss a variety of other subjects, including the state of California’s plan to ban the sale of new vehicles with internal combustion engines in 2035; Tesla’s battery day developments and whether Tesla will still have a leg up on its competitors in the three years or so when the new 4680 battery comes to exist; Tesla’s vertical integration and Ford’s lack of same in the EV space; the on-going saga of Trevor Milton and Nikola; the Volkswagen ID.4 introduction, and a whole lot more.

Which you can watch right here on Autoline After Hours