Looking for a small EV and live in California? Then the K27 may be the car for you.

That car came to mind when seeing the announcement from Kandi America that its K27 electric vehicle (EV) has been certified by the California Air Resources Board (CARB) for emissions.

The K27 is a seemingly tall, boxy-looking four-door. 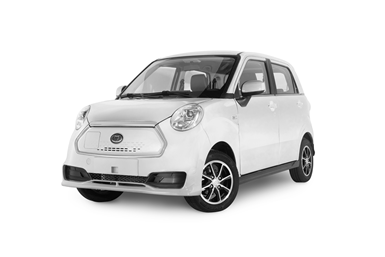 The company describes it as having “ample interior space that can comfortably accommodate up to four passengers, making it an ideal automobile for urban driving.”

Go back and look at those Fiat 500 numbers. Unless you have a penchant for stovepipe hats, the K27 is even smaller than the Fiat 500 by a non-trivial amount. The 500 almost seems bulky by comparison.

If you’re in California, you can drive K27 rather economically:

Incidentally: Once you drive off you won’t get too far.

And you won’t go too fast.

Among the features of the K27 are a backup camera, Bluetooth compatibility and a touch screen, or what the people at Kandi describe as “everything the modern driver needs.”

One thing that can be said for it: it is light on the wallet.

Consider: according to Kelley Blue Book, the average transaction price for a vehicle in September was $38,723. For that money, you could buy four K27s in California and have money left over for recharging.

*The Fiat 500 known in the U.S. has gone out of production. While there is a New 500 recently introduced in Italy—an electric vehicle, by the way—it isn’t coming to the U.S. market.