Ninth in a series: Just because you didn’t become an astronaut doesn’t mean you give up on velocity
#Brembo #Ford #HP

When Amy Marentic was going to college, she wanted to be an astronaut. This wasn’t some sort of idle thought. She obtained a Bachelors in Aerospace Engineering from the University of Michigan. (She subsequently earned a Masters in Industrial and Manufacturing Engineering from U-M.) 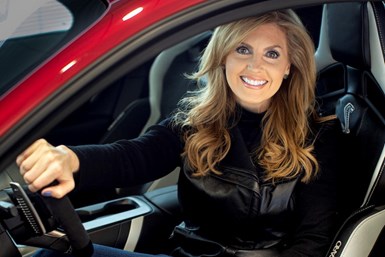 That astronaut idea didn’t pan out. Which doesn’t mean that she isn’t any less interested in things that go fast. Not astronaut fast (i.e., an astronaut on the International Space Station is moving at 17,000 mph). But Ford fast, as in one of her cars being a 2014 Mustang Shelby GT500.

And she has a position at Ford that puts her right in the thick of things in terms of performance, as she is the North American Product Line Director for Ford Icons, which means the forthcoming Bronco and Mustang Mach-E, the Mustang, and the Ford Performance vehicles, including the Ford GT, Shelby GT500, F-150 Raptor, and the ST brands, the Edge ST and Explorer ST.

What’s also worth noting is that in a previous position at Ford, Marentic was responsible for the development and launch of the current-generation Police Vehicles. (Know fast to go fast.)

Given the number of vehicles she drives, it isn’t a case of one car that she really likes in her garage. There are three that she feels good about and is sharing with us here.

Why It’s Cool: I love the GT500 because I worked on it with Carroll Shelby.  He was a special human being, and my time working with him was some of the best of my career. I also thought at the time it may be the highest horsepower that we would ever do on a Mustang and wanted to make sure I owned a V8 with 662 hp.

Why It’s Cool: The Explorer ST is just an incredibly fun, everyday driver.  It looks amazing and I love the torque curve of the EcoBoost engine and the red Brembo Brakes with the Black Wheels.

Why It’s Really Special:   It recently saved my life. I got hit on the highway, spun around in traffic and the Explorer was totaled.  I didn’t have a scratch.  I ordered another one exactly like the one that I lost. So thankful!

Why It’s Cool: I think I will always want to have a Raptor because it makes me happy when I get in it.   Everyone knows how capable the Raptor is off-road, but most are shocked at how smooth it is on-road. Another surprise and delight is the Raptor wave…who knew there was a secret wave between Raptor owners?