Twelfth in a series. The sound of an exhaust note is a universal language of enthusiasm
#Volkswagen #people #Porsche

This is one of those stories that is hard to believe is true, a story about how past is prologue in a way that no one could have imagined once upon a time.

Serban Boldea was born in Romania. He went home from the hospital in a VW Beetle.

His first word was not mamă. It was not tată.

It was auto. (Yes, the same in Romanian as in English.) 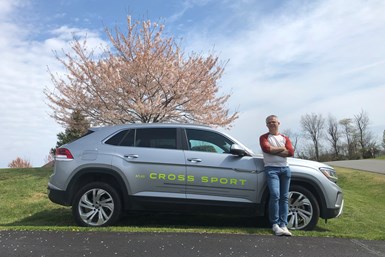 When he was growing up, Romania was under a communist dictatorship. Western toys were rare. But seven-year-old Serban got a small windup Porsche Targa, a treasured possession for a young băiat.

He came to the U.S. in 1991. He started his automotive career at Mazda North American Operations. He spent 10 years there.

Yes, that ride home from the hospital evidentially mattered.

In his 13 years with the company, Boldea has had a number of positions. He was responsible for launching the Chattanooga-built Passat and the all-new Atlas Cross Sport. Today he is the director, Product Marketing, for VoA.

Why It’s Cool: “With the top down, the 964 is an experience. By today’s standards it’s not fast, but you smile every time you get behind the wheel.” He says there is something different about driving a 911, that the cars have a soul. “The satisfaction to push the revs in second gear and hear the sound is pure joy. It’s that same kind of soul that I want to keep in our cars. Every GTI owner knows what I am talking about. And it’s my job to keep that alive.”