Tenth in a series. Yes, he’s a designer. But he also likes the visceral enjoyment of driving (good-looking vehicles).
#Toyota #people #Lexus

Kevin Hunter grew up in suburban Detroit, an easy bike ride away from a giant Ford transmission plant and nearly as close to a GM Automotive Components Group (what existed before the original Delphi Corp.) factory.

A fairly common experience when you grow up around here. (I grew up down the street from the Detroit Diesel plant. That’s just how it was.)

After his graduation from the then-Center for Creative Studies in downtown Detroit in 1982 Hunter went to work for. . . Toyota.

At its Calty Design Research studio in Newport Beach, California. (Slightly different than the west side of Detroit, in case you are wondering.) 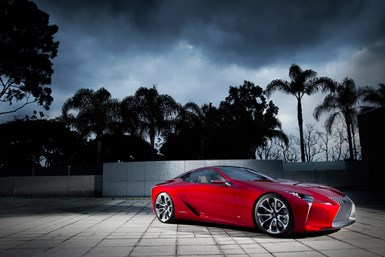 He started as a creative designer and worked his way up the ranks. In 2007 Hunter became the president of Calty. (For those of you who are starting out in your careers, take Hunter’s consistent execution of creativity and work as a lesson as to how the good can prosper. And it is worth noting that there is now a Calty studio in Ann Arbor, Michigan, which is certainly a nice locale, but still not Newport Beach.)

It is interesting to consider what happened at Toyota during Hunter’s time at Calty.

Lexus launched in 1989 and has become a solid player within the suite of luxury brands.

Toyota has gone from a brand that was known as being an “appliance”—not because of its vaunted vehicular reliability, but because of what was generally considered an array of uninspired design—to one that leads some people to express surprise at the extent of the styling.

Hunter has had his hand in many of the vehicles that have come from the three marques over the years, whether it took the form of a concept (e.g., Lexus LF-1) or production vehicle (e.g., current-gen Avalon).

Why It’s Cool: “This is my primary driver. It is a sexy, well-balanced GT. It's sophisticated yet gutsy, with a bold engine and exhaust note when you want to punch it! It’s a very special car for me: LC started as a concept car—the LF-LC—that was created by our team in Newport Beach, California.”

Why It’s Cool: “I’ve had the Porsche 997 for over 10 years, and it’s one of my favorite 911 body iterations. It’s very simple:  black on black, six-speed manual, 19” Turbo wheels. I still love the pure, mechanical feel and physical driving experience!”