Fourteenth in a series. One could say he’s definitionally a “car guy”
#Acura #people #Porsche

The unveiling of the 2021 Acura TLX was met with comprehensive positive commentary, as the design and evident engineering (we can see what it looks like; we can only note the technical specs until we drive it) of the sport sedan (e.g., new 3.0-liter V6 turbo; body structure fabricated with aluminum and press-hardened steel for highly improved torsional rigidity; double-wishbone suspension; electric servo brakes; all-wheel drive. . .  ) provide a clear indication that Acura is serious about its chops in the performance segment of the above-mainstream marques. (Yes, one could simply say “luxury marques,” but whether it is BMW, Mercedes, Lexus, etc., somehow the offerings of vehicles that are meant to be driven fast and hard don’t seem to fit the definition of luxury, which seems to be more about sumptuousness than sportiness.) 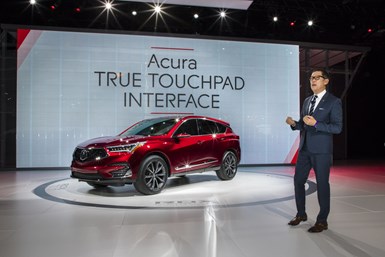 Ikeda and the RDX. (Images: Acura)

The 2021 TLX follows the RDX. The third generation of that crossover was introduced as a model year 2019 vehicle to similar levels of acclaim (that continued long after the introduction as it is the real deal, as the TLX promises to be). Already a segment leader, the Acura team would have, more or less, rested on its laurels with the RDX, but they did quite the opposite, plowing new ground and making the vehicle all-new from the platform on up. (Oftentimes, it seems, vehicles that are described as being “new” would be more accurately described as “improved,” which isn’t the same thing. But the RDX was new.) 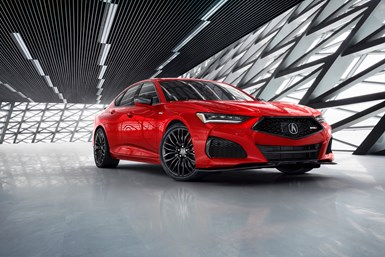 All of this is prelude to the guy who runs Acura, Jon Ikeda. Ikeda has been with American Honda Motor since 1989—as an Art Center grad, he joined the company as a designer and has worked as one for many years both in the U.S. and Japan, until July 2015, when Ikeda became vice president and general manager of the Acura Division. In 2019 he was named Acura Brand Officer.

So although he is now more about a boardroom than the studio, given evidence of the RDX and the TLX there is no question that he spends more than a little time in the studio. And another place that Ikeda is exceedingly comfortable is the paddock at a race track, as the company’s tagline “Precision Crafted Performance” is something that Ikeda knows in his bones: performance is important to him; this isn’t a bit of marketing-speak.

Why They Are Cool:

The 911: “I’ve owned the ‘67 S for over 23 years. I was fortunate as a teenager to have a neighbor next door that paid me to wash her car every week.  It was a late ‘70s 911 Turbo.  I would have done it for free, but she paid me to wash it!  My excuse to drive it was that I needed to get all the water out of the door jams, and I would take it for a spin. . . a long way around the block!  As a 16-year-old it was an experience that I never could forget.

“As an ex-car designer: the 911 styling is just timeless.  The sound out of the 2.0-liter flat six with sport pipes just lets me feel like I’m connected to Steve McQueen for a split second!  Who wouldn’t want to feel like Steve for even just a second?  Cool!”

The 914: “The 914 has been with me for just a year.  A friend took 9 years to restore it, then ran into an unhappy better half, reminding him he just has too many toys—his garage is full.  He couldn’t part with it, so he did the next best thing: asked me to buy it off of him. We live close by.  As a car guy, I understood.

“The coolest thing about 914s is how low you sit in the car.  It’s really very simple, old-school fun, a lightweight, quick turning, agile car.

“Both cars take me back to days when sports cars were just more simple and light. I enjoy them both.”