Second in our series of what auto people have in their garages. Here’s a couple from Mark Trostle, head of Ram and Mopar Design
#racing #people #Dodge

As a high school student, Mark Trostle saw an announcement about an automotive design contest as he was making his way through Detroit Autorama. (One might have said “as he wandered through Detroit Autorama,” but given his love of the automobile—especially things of the hot-rod and modified nature that is characteristic of what is sometimes called “America’s Greatest Hot Rod Show”—his working through the displays was undoubtedly deliberative.) 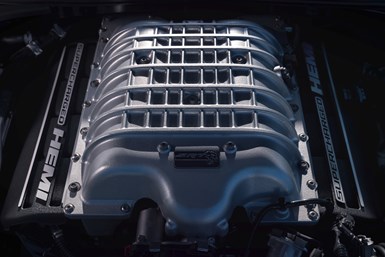 The grand prize was a scholarship at the then-Center for Creative Studies (now “College for”).

He interned at GM. Then Chrysler. He joined then-Chrysler (now “FCA”) at age 22 in 1992 and has been designing legendary cars ever since.

Trostle was also instrumental in 2013 of initiating Drive for Design, a design contest for students in grades 10-12.

Today Trostle is the head of Ram and Mopar Design.

Why It Is Cool: “I enjoy looking at the car as much as I enjoy driving it, as cars with a soul should evoke that emotion!  It always brings back good memories of developing it along with Ralph [Gilles] and the rest of the design team.”--Trostle

Why It Is Cool: “I usually love cars to have their hoods closed, but this engine is just as beautiful as the exterior.  This car represents what the passion of a small team can achieve.”--Trostle