Sixth in a series. Yes, there are FCA vehicles in Ralph Gilles’ garage. But ones you might not think.
#Dodge #Fiat #AlfaRomeo

Why They Are Cool: “I love modern cars, of course, as it is the business we are in. However, long before we were FCA, which includes great brands like Jeep, Chrysler, Ram, Dodge, Fiat and Alfa Romeo, I have been forever-in-love with the Giulia GT and GTV. Although born in 1965, they are very sophisticated machines for their time. They have all-aluminum engines and stunning body work. Seems like I am always tinkering on them, which is very therapeutic for me!”— Ralph Gilles

The whole notion of providing an intro to Ralph Gilles is somewhat absurd.

It is thoroughly absurd.

The man who is presently the head of Design for Fiat Chrysler Automobiles N.V.—as in all of the brands under the FCA banner (even those that don’t have an F or a C in their nomenclature)—is certainly well known throughout the automotive community, especially the enthusiast portion of that group. It is hard to imagine that there is anyone in the automotive world who doesn’t know who Ralph Gilles is. 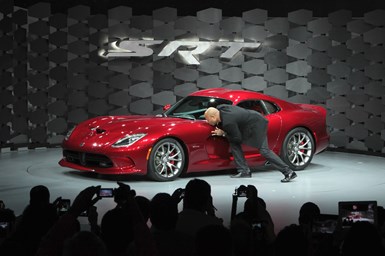 After all, as the nearby photo taken at the New York International Auto Show eight years ago shows, Gilles loves cars, in this case the 2013 SRT Viper GTS. Yes, he’s giving it a kiss.

Gilles has a BFA in Industrial Design from the College for Creative Studies. He received that in 1992, the same year he joined the Design Office. Six years later he was the manager for Jeep Interiors, and in ’99 became the senior manager in Studio 3. Next, it was to the director for the Large Car Studio, Family Vehicles, in ’01, and the director of Truck Exterior/Interior in ’05.

The following year he was named vice president of Jeep/Truck, Color and Trim Studios, and Specialty Vehicles. (It is probably worth noting that four years earlier, in 2002, he’d gotten an MBA from Michigan State University, so he supplemented his design chops with business acumen.)

And if that wasn’t enough, also in 2009 he was named president and CEO of the Dodge brand.

In 2015 Gilles became head of Design and member of the group executive council of Fiat Chrysler Automobiles N.V.

And when he’s not doing his job, he loves to drive.

He’s taken part in the Mille Miglia, Targa Newfoundland Rally, the Car and Driver One Lap of America and the SRT Viper Cup Series.

Which is to say that even if he hasn’t been responsible for some of the most memorable cars of the last 28 years he would have street cred to spare.