Chevy vs. Tesla: It’s On

Fremont Chevrolet in Fremont, California, is three miles away from the Tesla Factory, also in Fremont.

And earlier today General Motors, at Fremont Chevrolet, orchestrated the delivery of the first three Bolt EVs to customers.

While this wasn’t as rock-concert-orchestrated like, say, the delivery of the initial Tesla Model Xes, it was no less tactical in execution.

For example, consider the customers:

If this was LA, one might have thought that they put in a call to central casting. 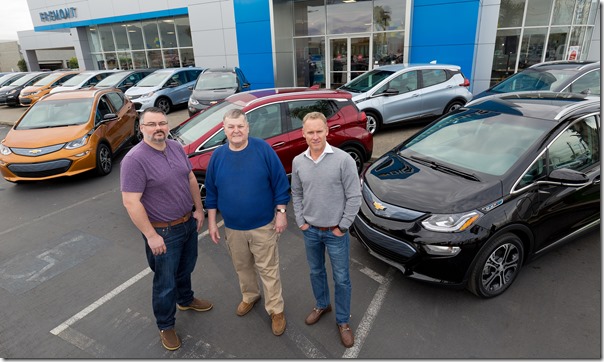 The first three customers for the Bolt EV: Edmonds, Mattos and Henry (l to r).  Almost in the shadow of the Tesla factory.  Which used to be a GM plant. (photo: Martin Klimek for Chevrolet)

And with echoes of GM CEO Mary Barra when she revealed the bolt at the 2016 CES in Las Vegas (not at the 2016 NAIAS in Detroit, mind you), Alan Batey, president of GM North America and Global Chevrolet brand chief (remember that Chevrolet is still by far the GM volume leader in the U.S.) said, “All of the hard work that the Chevrolet team have put into designing, engineering and building the Bolt EV brings us to this truly satisfying moment of making the first deliveries to customers on-time, as planned. Only Chevrolet is able to offer a vehicle like the Bolt EV, with ground-breaking technology wrapped in a modern design that is also fun-to-drive at an affordable price.”

So let’s see: There’s a knock on Tesla’s tardiness to market with products. And another one on price.