Clover: Adient Creates an Interior for the CASE Future

Connected, automated, shared and electric (CASE) is the near-future—and Clover has an interior execution that is just as advanced and almost ready to go
#Adient #Autoliv #LG

But then the door opens into a studio, and there is something with seats, but it is something more than somewhat unexpected.

It is AI19. Or, Tom Gould, Adient director of Design & Technology, tells you: “We code-named it ‘Clover.’” 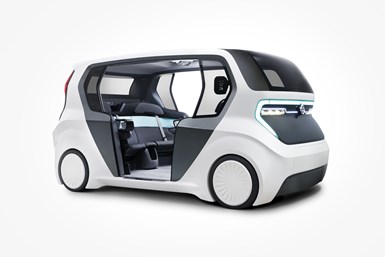 AI19: the soon-to-be toaster-like classic configuration of an urban transport vehicle. Adient concentrated on the inside. It created various “people” who would use it—ranging from a busy businessperson to a family—and designed and engineered the interior accordingly. (Images: Adient)

Clover is a concept vehicle. An autonomous transport vehicle. It has the now-becoming familiar toaster configuration that seems to be what the future will hold for taking people from here to there and elsewhere sans driver.

But Gould and his colleagues in that studio are all about what’s inside.

“We see all of these changes coming from connected, autonomous, shared, and electrified vehicles and we know that those are going to impact our seats,” Gould says.

But then the thesis takes a bit of a turn from the usual approach because he tells you that he is a car guy, he likes driving, and the notion of being in a vehicle and not being behind the wheel—not only because there is no wheel, but because the vehicle of interest is something that will be owned and operated, likely, by a fleet, rather than an individual—is something that needs to be addressed for others who feel the way he does.

“How do we make it a pleasurable experience?” he wonders.

How is someone who likes to drive going to think that being in a Clover is the right way to go?

It all comes down to the interior execution.

If you have to give up driving, then at least the transport time should be comfortable and pleasurable.

Of course, as they were working the entire interior and what is nowadays referred to as “experience,” Gould and his team worked with several other suppliers, including Autoliv, Gentherm and Nidec (or Omron Automotive, at the time).

“We worked on it for about a year, and then brought in LG.”

And LG brought to bear its electronic wizardry, OLED screens, both large and small, to this vehicle that utilizes webOS.

Let’s say that this is 2030 (or somewhere in that timeframe—although Adient, as Gould will tell you, is pretty much ready to go sooner rather than later). You book a ride with your phone.

The vehicle drives up and a camera just to the right of the doors that slide into the body side scans your face. Which has a few consequences. For one thing, you’re not going to be getting into a vehicle that is not the one you’ve ordered because the doors won’t open. (“There will be a number of these running around,” Gould says, “and they’ll all pretty much look the same.” Imagine being in a pre-Uber Manhattan and having to find one yellow cab.)

And it also means that when you get inside, “your” seat is indicated via lighting. Gould points out that some people can’t ride in a vehicle facing the opposite direction of forward motion, so that seat wouldn’t be booked.) More, your preferences in terms of what you’ll see on the curved OLED screen that goes from side to side or what you’ll hear from speakers embedded in the headrest (eight speakers, as well as noise-cancellation tech) and the position of your seat are all prepared. LG worked with Adient on that functionality.

The two companies also worked on developing the individual screens and controllers that are at the four primary seating positions within the vehicle that allow infotainment and comfort to be adjusted per one’s preference while on the ride.

“We called it ‘Clover’ because of the seating configuration,” Gould says. There are four seating positions (although there are center consoles between each pair of seats that can be flipped up so that there is a position for a child or someone who got the short straw).

Each seat is positioned at a 15° angle. Gould explains, “In a shared environment, if someone is sitting across from you and you’re shy, you may not want to make eye contact with that person. So by positioning the seats at 15°, you’re looking at a point at the center of the vehicle, not at the person directly across. And if you do want to talk, that’s easy to do.” This is one side on the inside of the vehicle, with the other being alike. Note the large screen behind the seats. Riders on the opposite side of the vehicle can select what’s shown on that one—it can be everything from entertainment to the view of a camera showing the progress of Clover through the streets—and there is another setup on the other side, as well.

There is another aspect of the orientation of the seats that is important to a vehicle that is going to be used for ride hailing (and sharing) application.

Gould explains that even when one of the seats is in the relaxed mode, the heel point is actually pulled back, so there is less obstruction in the open space of the vehicle. (Think of business class seats on a commercial airliner where the person reclining has a leg rest that extends out in front of the person, which is a challenge should you have the window seat and need to reach the aisle.) Gould points out that they designed the interior using virtual reality software so they were able to have a full-size realization of what was being developed. One consequence of which is that they were able to determine the ingress/egress protocol.

But Gould notes, “The seat doesn’t recline. The whole seat rocks back.”

He explains that they are using a different kinematic in the seat than would ordinarily be the norm. Part of this is to simplify the structure.

What’s more, Clover (from the inside) isn’t something that requires extensive development work; Gould says that it is “at least 90%” done. Note the lower center, which is a refrigerator drawer that contains snacks. When an item is selected for consumption, 3D cameras in the headliner ID the individual who has taken it and charges the account accordingly. The tray between the two occupants can be flipped up thereby providing seating for a third person.

Simple But Clever in Clover

If you’ve been on a Delta flight this year, you’ve undoubtedly seen the pre-flight safety video that includes a recommendation that should your cell phone fall into the crevasses on the sides and back of the seat cushion.

“We don’t have a bight line in the seat: should your phone fall out of your pocket or if you drop it, there is no place for it to fall into,” Gould says. They’ve also put fabric flappers on the sides of the seat for extra phone-drop security.

The several references to things with wings that have come up are not just metaphoric. Back in 2018 Adient and Boeing created a joint-venture company named “Adient Aerospace.” Yes, it designs, engineers and produces seats for commercial airliners and other aircraft.

And there are lessons learned, Gould says.

Remember that Clover is probably a vehicle in commercial service. So the seats have been engineered so they are simple and quick to fix in the event that they’re torn or stained or otherwise damaged. Form and trim can be readily replaced. The coverings are a Mélange fabric and Artisyn, a woven fabric that has the appearance of suede. The seat covers are treated with “Fresh Per4mance,” which provides anti-soil, anti-moisture, anti-microbial characteristics. The 15° angle of the seat orientation is sufficient to allow easy conversation while also allowing people across from one another not to have to look directly at the person in front of them.

Gould points out that the vehicle shell will outlast the interior (again, like an airframe). This means the interior had to be designed so that it could be replaced when there is a need for a full refresh or quickly cleaned should something go awry.

And the Coffee Shop

Gould says that vinyl is a good, durable solution for vehicle interiors, but for Clover they wanted to use fabric. For one thing, it provides a “warmer, friendlier feel,” which goes to a point that he makes about what they want the Clover experience to be like: “a coffee shop rather than a car.”

And beyond just the execution of the seats, they’ve also installed a refrigerated vending machine in the vehicle, a drawer than is packaged between two seats. What’s interesting about this is that there are 3D cameras in the headliner of the vehicle so that when a beverage or a snack is selected, the camera sees who has taken it and then can charge the rider’s account. And what’s just as important—something that people have discovered to their dismay while browsing some hotel minibars—is that if the can of soda is replaced and not consumed, the system isn’t going to charge for the browsing.

The Future Is (Almost) Now

“The seat structure is largely based on our current parts bin,” Gould says. “There is not much in Clover that we couldn’t do today.

“The future part of all this is more of the cultural context”—how will people take to shared vehicles?—“and infrastructure”—will companies like Lyft and Uber deploy autonomous transporters (assuming that the autonomous tech is fully baked)—“than our ability to build any of this today.”

Soon we may be in Clover.