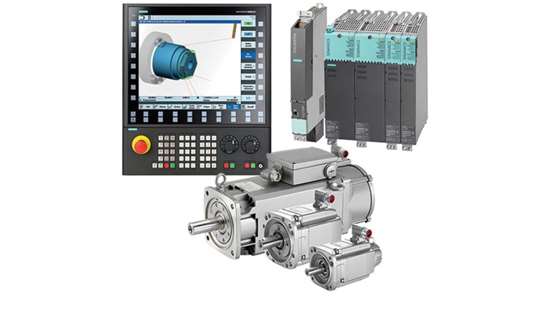 New CNC hardware can be integrated into existing machines for notable performance upgrades.

For example, the new 840D sl CNC from Siemens PLM Software (siemens.com ) incorporates the latest version of Sinumerik Operate and its new auto servo-tuning algorithm. Control loop parameters and damping filters are automatically calculated so that machine dynamics are under constant control and all drives automatically adjusted in response. As workpiece mass changes or tools wear, each processing parameter change triggers an optimization response between processing steps, improving precision and productivity.

As friction is a necessary evil in all machining operations, accuracy is always deteriorating to some point. Sinumerik 4.7 includes new friction compensation for detecting and reducing friction-dependent path deviations due to sliding or static friction. Tolerances are tighter as a result and contour accuracy is higher.

Increasingly, CNC upgrades are simpler to integrate and maintain. Retrofitting a machine tool to take advantage of the latest CNC advances can be a cost-effective means of achieving higher performance, lower costs and improved accessibility to machining data. A CNC retrofit should not be confused with a CNC conversion, where a manual machine is converted into CNC operation. A CNC retrofit does not include major upgrades or repairs to the machine mechanics. A CNC retrofit replaces the CNC, axes servo motors and drives, spindle motor and drives, and a portion of the associated wiring and related electromechanical components, according to FANUC America Corporation (fanucamerica.com). Assuming a machine tool is generally in good shape mechanically, CNC retrofitting is typically the lowest-cost solution to improve the machine tool’s overall performance.

Approximately 20 percent of a machine tool’s running costs are due to electrical energy consumption from pumps and drive systems when machining. Servo motors and spindle drives are continuously accelerating and decelerating as they change speed and direction. When accelerating, motors draw energy from the electrical system; when decelerating, kinetic energy is converted back into electrical energy, which must be dissipated. CNC-programmable functions can dynamically turn off both main and peripheral devices when not in cycle, based on an algorithm that considers idle time against the length of time each component needs to restart and achieve full motion. Electricity cost reductions of between 30 and 50 percent in the new hardware can go a long way to justifying retrofit costs, the company says.

When in Doubt, Demo

Post-processing is the handoff from CAM software to the machine tool, and with multi-axis machining predominating, such calculations can be intensive. ”The 5-axis post-processor provides controller syntax and language commands to the machine tool CNC,” says Alan Levine, managing director, OPEN MIND Technologies USA (openmind-tech.com). “FANUC, Siemens, and Heidenhain control the large predominance of five-axis machine tools, and many others still emulate FANUC language. Though the devil is in the details and most post-processors have unique requirements, five-axis postprocessors can be developed with high confidence.”

A successful five-axis demo emphasized by live cutting is very impressive to the shop owner, Levine says, but many software vendors back-pedal quickly at the thought of a live five-axis demo without the ability to prepare every step to reduce their risk. The customer should pursue these demos, even if a consulting fee is required for this task. “Marketing departments make colorful brochures, and good engineers can guide a demo to produce the desired results, but a live test cut tells a story—interaction with the machine tool, cutting times and surface finish—that is clear to all.”

Streamlining and optimizing conventional CNC programming regardless of whose control box you run will be a major step forward in manufacturing, says Philippe Solignac, marketing director for SPRING Technologies (ncsimul.com). The company’s new package, NCSIMUL Solutions V10, combines tool databases and simulation engines to optimize CNC programs based on machine tool kinematics or controller type. If a target machine tool is offline for maintenance or in use on another project, direct access to 3D tool data and cutting conditions means programming can be switched to another machine with just one click.

“NCSIMUL cuts out the need for external post processors and replaces them with an integrated NC processor,” Solignac adds. “Everything is calculated in native CNC format based on the machine and its controller, meaning you can generate new G code on the fly and reconfigure cutting tools in the magazine to be compatible with the new program and cutting conditions. The new machine can be brought into play without any tweaking in the original CAM software environment.”