Ford v Ferrari brings up questions of competition in the auto industry in this new emerging age of global awareness.
#Ford #Ferrari #racing

I went to see the movie Ford v Ferrari. I expected to see some amazing race car footage, which I did and greatly enjoyed. But I found myself a bit troubled to see this racing car story mainly driven by a large automaker’s efforts to promote their automobiles to consumers. It also led me to question competition in general, in our new emerging age of global awareness.

The scene of Carroll Shelby taking Henry Ford II for a wild ride in the GT40 is almost worth the price of admission to the movie all by itself.

Watching the loud and fast Ford GT40s throughout the film, both on the test and racetrack, was completely awesome. As a kid, I loved all kinds of high-performance cars. I was always excited to get a ride in a Ferrari from several friends of our family that owned them. My uncle had a vintage Ferrari 375 short wheelbase, which he took me for some few high-speed laps in on the Elkhart Lake track, which I will never forget. (He unfortunately sold that before the prices for those cars went sky high). Out of college I once drove a Porsche 928 at 160 mph on the German autobahn, another memorable moment. While I focus on mobility, know that I love speed too! It’s exhilarating! 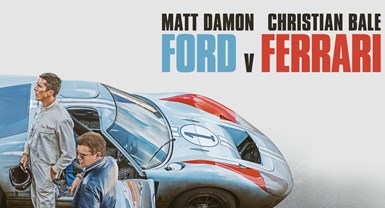 Obviously the 24 Hours of Le Mans is the pinnacle of automotive racing. The story of driver Ken Miles certainly is an interesting one. Actor Christian Bale played the part well. However, to see all of this effort based on Ford’s efforts to sell more cars made me feel a bit sad. Yes, I know sponsorship for auto racing is primarily from automakers for this exact purpose. But here were people putting their lives on the line in order to sell more Mercury Comets. It made me uncomfortable.

The view inside Ford Motor Company in 1966, when this story takes place, was also interesting to see. The scene of Carroll Shelby taking Henry Ford II for a wild ride in the GT40 is almost worth the price of admission to the movie all by itself. Ford marketing chief Leo Beebe looked like the type of executive most of us dislike. And it was interesting to see a young Lee Iacocca in action as a young Ford executive. (I was fortunate to spend an hour with Iacocca after he retired from Chrysler—discussing electric bikes of all things).

Why do we compete?

Strangely, I found myself watching this movie and wondering why we humans compete in the first place. Obviously, billions of people around the world watch individuals and teams compete in all manner of activities. I suspect that in an earlier time of human evolution, two men would “compete” —and fight to the death. Winning at that time would mean you the winner could continue to LIVE. So does winning a competition embody a deep human interest inside us to survive, stay alive, live? Individual vs individual or team vs team?

Now as I look at the picture of earth, taken from space, competition doesn’t come to mind. All across the globe countries are working together to address the climate crisis. It feels to be a new age of collaboration, not competition. What is the importance of competition when billions of people on earth are seeking to improve the planet’s environment? Does competition become less important in our lives? This is what I was thinking about watching this movie.

But there is a new ecological car racing series: Formula E. Perhaps this series has a good future, although I’d miss the roaring, ear-piercing sounds of the gasoline powered race cars.

And there are even some developing autonomous car racing series, which I am confident will never become popular. Why? Because knowing what a driver has to go through—and what is at risk—is a primary reason millions go to see racing. Watching computer-driven cars race would be like watching a physical representation of two algorithms competing in Google’s labs. Not interesting at all.

If you didn’t love the race scenes, like I did, this was not a good movie. I wanted to leave on numerous occasions. Several times during the movie I wondered if Ford financed the movie in part, and that I was watching a two hour “commercial.” But it did make me think about our future of Competition v Collaboration.