Appears in Print as: 'Considering Reshoring'


Politically it may be popular. But logistically and economically it may not necessarily be advantageous
#BMW #Honda #Toyota

One of the things that must be kept in mind regarding reshoring is simply this: Global vehicle manufacturers serve global markets and, as Dave Andrea, principal, Plante Moran, who conducts the firm’s annual OEM-supplier Working Relations Index, which is supply-chain centric, pointed out: “They have to have a supply base to serve other regions. They don’t want to have a reverse problem.”

That is, while it may seem to be a good idea to have all of one’s suppliers an arms-length away, it may be the case that there are operations a hemisphere-length away, which could cause some non-trivial issues should the supply chain lose too many links.

“The issue is that companies need to conduct a rational thought process that isn’t about chasing cheap labor but considering total landed cost to determine where to put operations,” Andrea said.

To be sure, in some cases there is an external driver for reshoring some capacity, like the United States-Mexico-Canada Agreement (USMCA), which has modified rules of origin and origin procedures which provide financial incentives to perform vehicle and parts production in the U.S. “That is driving some of the reshoring,” Andrea said.

However, there are other considerations, both from the standpoints of the OEMs and the suppliers.

Andrea explained that BMW, through its $10.6-billion plant in Spartanburg, South Carolina, where it produces the X3, X4, X5, X6 and X7 sport utility vehicles, not only serves the U.S. market but is the global center for production of those vehicles and consequently exports the vehicles to markets around the world. That plant has sufficient volume to make it an economically viable source for the production of its vehicles. 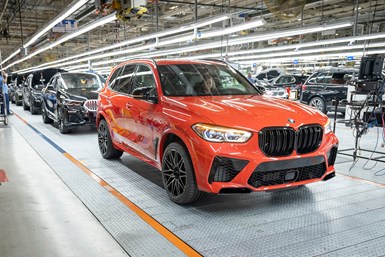 The five-millionth vehicle—an X5 Competition with a 617-hp V8—rolling off the line at the BMW Spartanburg, South Carolina. In 2019 there were exports from the plant valued at some $9.6-billion. Between 2010 and 2019 approximately 70% of the production at the plant was exported. (Image: BMW)

Similarly, but not as extensively, Andrea said that companies like Toyota and Honda use their U.S. operations to export vehicles to meet global demand.

However, he stresses that an objective is to avoid duplicate tooling costs, as that can have negative consequences on the finance sheets. Having a series of production sites can reduce economic viability.

Or take a hypothetical example of a German supplier that ships some of the production of a plant it has in Germany to a U.S.-based factory. Andrea hypothesizes that the plant has a 300,000-unit capacity and the capital cost as a result is pennies. However, there is a requirement that it build a plant in the U.S. to shorten the supply chain.

As a result of that, 20% of the factory in Germany is empty and a factory-built to have a 100,000-unit capacity is not an efficient module. The result of this is a huge increase in capital cost. Suddenly, those pennies are quarters.

“This is where OEMs and suppliers have to rationalize their footprints,” he said.

Andrea said that right now the automotive supply chain is highly concentrated. There are about 400 suppliers that account for as much as 90% of the spend of any OEM.

According to Andrea, it would be good were there a U.S. industrial policy in place that would make it attractive for companies to locate their manufacturing operations in the U.S. This would include assuring that there would be the scale for the U.S.-based facilities to be able to export product out of the U.S. to other markets.

Which leads to a consideration of how receptive other countries will be to exports from the U.S. if the U.S. isn’t receptive to imports to those countries.

Reshoring can sound good. But it isn’t simple. And it can be expensive.