During his presentation at the Continental shareholders meeting a couple weeks ago (the company reported that even though global automobile production was down 6% in Q1 2019, Continental’s sales of 11-billion were “on par with the prior year level,” which is certainly a positive accomplishment), Continental CEO Dr. Elmar Degenhart made an observation that has consequences not only for Conti, but for many organizations throughout the global automotive supply chain: “After 2030, the last generation of diesel and gasoline engines will be launched. After 2040, it is possible that no more diesel and gasoline engines will be sold. From 2050, roads and cities will ideally be free of CO2 emissions.” 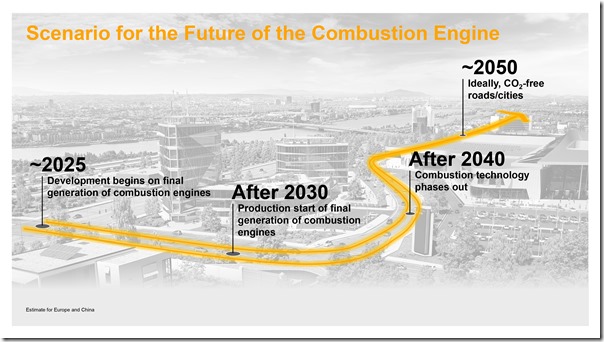 Realize that Continental has long been a supplier of components and systems for gasoline and diesel engines, so Degenhart’s prediction is an informed one.

In anticipation of these changes, Continental has taken its powertrain business and created a new business, Vitesco Technologies, which will offer an IPO later this year. According to Andreas Wolf, who is CEO of Vitesco, “The decision to become an independent business and the preparations for the partial IPO clearly show that we are both willing and able to change.”

Meaning, presumably, that if there is going to be the powertrain transformation that Degenhart anticipates, then while the company will continue to offer such things as products that address emissions for internal combustion engines, they are going to be working on developing things that help lead to a goal of 50% reduction in CO2 emissions by 2030, ranging from electric drives to even hydrogen-based fuels.

Clearly, they’re embracing change at Conti. Those that don’t are probably going to wish that they had—but by then the opportunities will have undoubtedly passed.