Addressing things like mobility, the environment and connectivity, Continental is developing game-changing technology for the automotive future--and that future, in some cases, is at hand.
#Continental #Google #Chevrolet 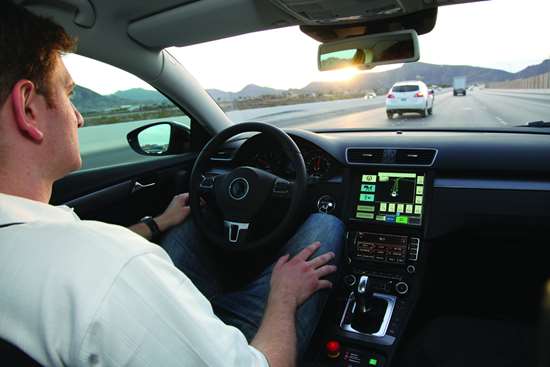 Yes, no hands. And no, the car is not standing still, but driving at freeway speeds. Conti is developing autonomous vehicle capability that steers and brakes as needed without driver intervention. 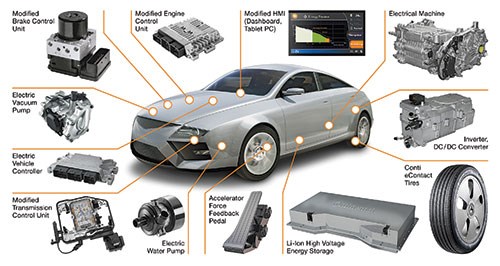 Elements of an advanced vehicle. While some companies are working on one or more of these technologies, Continental is addressing the array. While individual elements can provide benefit, there is greater leverage through a more holistic approach. 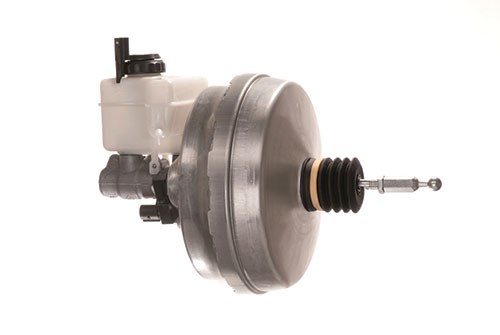 To be sure, hybrids, electric vehicles, and autonomous vehicles are technological advances of the first order, there is still some necessary and important work that must be done for vehicles of today and tomorrow. For example, the ContiTech Div. is working on the ways and means to lightweight components, which contribute to improved vehicle efficiency. They’re using polyamide in place of aluminum for motor mounts, which is a weight-save of about 50%. They’ve developed an aluminum brake booster, which is 1,700 grams lighter than a conventional steel booster, again a savings of about 50%. And they’ve even made the panel thickness 50% less than other aluminum brake boosters, for weight savings.

The strategy taken by Continental Corp. (continental-corporation.com) is a rather clever one. That is, all companies (should) play to their strengths. All companies (should) play to their custo-mers’ needs. The first means developing an array of competencies in developing, making and selling products. The second usually means addressing specific customer requirements for this, that or something else.

Yet the some 173,000 people at Conti, while certainly becoming capable in various methods, processes, functions, and capabilities, are doing something more, something that has allowed the €32.7-billion company to achieve continued growth over the past several years.

So far this year, as Continental CEO Dr. Elmar Degenhart stated in early May, “For the current year, we . . . anticipate a rise in sales of around 5% to more than €34 billion and an adjusted EBIT margin of over 10%, particularly since we have already hit these targets in the first quarter despite all the adverse circumstances.” With the adversity taking the form, in part, of a European car market that has been characterized by buckets of red ink.

Asked why the thinks that Conti has done so well, and why he thinks it is likely to continue, Ralf Cramer, member of the Continental Executive Board since 2009, and head of its Chassis & Safety Div. since 2007, and who will be leaving that position to become president of Conti’s organization in China, has a one-word answer: “Technology.”

While that is the sort of thing that many executives can and do say, there is something else about the Conti approach. Not only does it supply its customers with a wide range of products—things, like fuel injectors and brakes and tires and infotainment and so on—through its five divisions, it is doing so in a way that addresses what the company has identified as four societal megatrends, that fall under the headings of “Safety,” “Environment,” “Information/Communication,” and “Affordability.” The products being developed not only address things like emissions and fuel consumption and accident avoidance, but the company is producing them in a manner that takes eco-friendliness into account.

They have a maxim that they work to: “Engineering Green Value.”

That’s the “something more.” Each of the divisions is working to do what it does best. But each of the divisions is working in a synergistic manner, such that their products not only stand alone, but contribute to addressing the over-arching mission that the entire organization is addressing. They are working to develop cars that are safe to drive, which means everything from better brakes and better tires all the way to autonomous vehicle systems. They are working to develop cars that are more environmentally sound, which means everything from start-stop systems to improved turbochargers. They are working to develop cars that have advanced infotainment systems, which means everything from head units to sensor arrays that allow the car to have sufficient information to be, in effect, “intelligent.” And they are cognizant of the fact that they must develop this technology in such a way that it is affordable, not only for people in developing markets, but in developed markets, as well.

No doubt, the most fascinating area of work that’s being undertaken by the R&D and engineering personnel focuses on autonomous driving.

If you’d been driving around Nevada during late 2012, you may have seen a VW Phaeton with its badges obscured and a red license plate. If you’d looked closer, you may have noticed the driver didn’t have his hands on the steering wheel, yet the car was driving along quite appropriately for the conditions. The covered badges may have gotten you to thinking that there was something out of the ordinary about that car. The red license plate was a giveaway that this vehicle was registered as an autonomous vehicle—but you’d be not likely to know that was the case because Continental was the first automotive supplier to get such plates, so it wasn’t as if that was at all common. And as for the driving without hands—well, that’s the direction they’re going with the development of autonomous vehicle technology.

You may remember that Continental worked with General Motors on the 2007 DARPA Urban Challenge, on a Chevrolet Tahoe SUV with more visible sensors attached to the exterior than anything this side of something that’s traversing the surface of Mars. Yet there’s the Phaeton, looking like, well, a car that might have been driven off of a dealer’s lot. OK, the interior has more instrumentation than a car with the most advanced technology option package, but this is an engineering test vehicle.

What Conti is doing is deploying a number of different types of sensors—from cameras to radar to ultrasonics—sensors that are becoming increasingly common on vehicles for things like adaptive cruise control, lane departure warning, and rear backup assistance. (And no surprise that Conti is providing systems like these today.) Then they are using additional computing hardware and software that allows a fusion of the sensors so that autonomy is achievable.

The car maintains the appropriate distance between it and the car in front. It stays in its lane without straying. It reads highway signs such as speed limits and adjusts its speed accordingly. It steers itself. It can take evasive maneuvers (e.g., if there happens to be a pedestrian stepping out in front of it, the car will brake and steer to avoid a collision). It performs pretty much like a car was expected to by the 21st century for those who were thinking about it in the latter half of the 20th.

Listen to Alfred Eckert, head of Advanced Engineering, Continental Chassis & Safety Div.: “We are currently at the transition from assisted”—like adaptive cruise—“to partially automated driving. A lot of research and development work is still needed before fully automated driving is possible, even along just sections of routes.”

Automated driving isn’t being worked on by Conti simply because of the convenience that it would provide the driver, but it goes to that aforementioned mission that they are pursing. Sensor-based driving can mean increased safety and more fuel efficiency in driving. For example, in stop-and-go traffic, the car will stop, the engine will shut off, saving fuel, then go when possible. Conti personnel anticipate that by about 2016 there will be partially automated driving—as in this spot-and-go scenario (the car is doing the braking, as well as controlling the powertrain) at speeds up to 30 km/h. The technology seems to be on a path whereby there could be highly automated driving by 2020 (speeds >30 km/h). However, there are both infrastructure and legal issues that need to be addressed, too.

And the full-on automated driving, wherein you will probably be able to legally text behind the wheel (although it is going to be restricted to freeways, not congested urban areas)? Probably about 2025.

Sticking with the stop-start implemen-tation, which is essentially at hand, consider this: “There is currently a gap between the relatively low-cost 12-V stop-start systems and the considerably more expensive hybrid solutions with high voltages typically of between 200 V and 400 V,” according to Jose Avila, head of the Powertrain div. and member of the Conti Executive Board. So they are working on an array of modules—from 12 to 400 V—for the hybridization of vehicles.

A point is that there is working together across functions in order to achieve a more holistic solution to autonomous driving.

And this connectivity goes even further. “Today, more and more new vehicle functions are already based on connectivity. To create innovative functions, we are linking vehicle components and systems ever more closely with one another and, at the same time, increasingly connecting the vehicle to the outside world,” said Ralf Lenninger, head of the Strategy and Development department of the firm’s Interior div. Networking throughout the vehicle via bus systems—drive control units and safety systems and body electronics all linked so that if the rain sensor system activates the wipers, a message is sent to the braking system so that it is setup to deal with wet road conditions.

That’s internal networking. Of course, the networking goes far beyond that. Lenninger: “If we take a look at the consumers’ behavior, it becomes obvious: in the next few years, the connection of vehicle infotainment features to the Internet will become more and more widespread.” This is through smartphones as well as embedded vehicle telematics. While this may be primarily about things like streaming audio or alerts regarding traffic and the nearest available Starbucks, there is more.

As in networking vehicles to the infrastructure. Smart roads and smart cars. “With vehicle-to-X communication,” said Lenninger, “we are basically expanding the sensing range of the vehicle’s own sensors by a cloud-based seventh sense. This makes the vehicle part of the Internet of Everything and creates the basis for an intelligent transport system with a whole new world of functions.”

Smart, safe, environmental, connected, affordable. It is by working to develop these—individually and systemically—that Continental is pursuing success in the market.

How Far Autonomous Vehicles Have Advanced

The vehicle here, a Chevrolet Tahoe, nicknamed “Boss” after General Motors R&D founder Charles F. Kettering, was the winner of the Defense Advanced Research Projects Agency (DARPA) 2007 Urban Challenge competition in November 2007. The vehicle navigated itself through a 60-mile urban route setup in Victorville, CA. As you can notice, Continental was a big supporter of the vehicle, which was developed by Carnegie Mellon University. (Other sponsors, perhaps not surprisingly, included Google and Intel.)

Speaking of the victory and what it represented, Larry Burns, then-GM vice president of R&D and strategic planning, said, “The electronic technology in vehicles such as Boss can provide society with a world in which there are no car crashes, more productive commutes, and very little traffic congestion.”

Clearly, that Tahoe looks like it was a science project, with the array of gadgets on its roof. Chances are, only Sheldon Cooper acolytes would drive a vehicle like that.

But the ideals that Burns pointed out are laudable ones, and Continental (and admittedly other companies) is pursuing them. But in this comparatively short period of time between then and now, the sensors and instruments are hidden behind fascias and integrated into the vehicle in such a way that even the smartest car in the lot looks pretty much like any other.