You might be surprised to learn that there is presently a Ford Transit 350HD that is chock full of lithium-ion batteries that you can get right now that doesn’t come out of Dearborn but Loveland, Colorado.
#Dodge #Chrysler #FiatChryslerAutomobiles

As Ford moves toward an increase in the number of electric (and electrified) vehicles that it is putting on the road—in January, Bill Ford, Jr., announced that the company is investing $11-billion in this undertaking, which is to result in 40 electrified vehicles, of which 16 are full battery electric, on offer somewhere in the world by 2022—you might be surprised to learn that there is presently a Ford Transit 350HD that is chock full of lithium-ion batteries that you can get right now that doesn’t come out of Dearborn but Loveland, Colorado.

This isn’t some sort of retrofit where there is a group of guys in a garage that are working with bailing wire, duct tape and taking advantage of Amendment 64 to Colorado’s constitution.

Rather, the vehicle is being fully electrified by a company that has been certified by Ford as a Quality Vehicle Modifier, Lightning Systems. This is the real deal, an organization of engineers, retrofitting professionals and other team members who create a warranted (five year/60,000 on the powertrain and battery) electric Transit.

The Transit 350 HD is the workhorse version of the Transit lineup. It has applications as a passenger wagon—think, for example, of airport parking shuttles—or as a delivery truck—think of a UPS truck that you might see in the downtown of a major municipality. 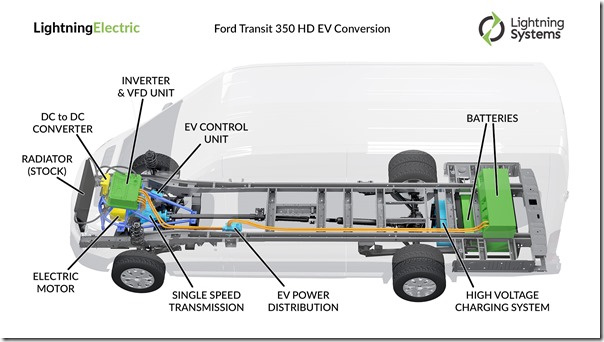 And according to Tim Reeser, CEO and co-founder of Lightning Systems, applications like those are absolutely ideal for the electrified version of the Transit even though the base model of the vehicle has a range of just 50 miles. For example, consider those runs that the shuttle drivers make from a satellite parking lot to an airport terminal. Generally it is on the order of two miles or so. So conceivably a driver can make 12 runs, take a 30-minute break for lunch while the Transit is being recharged on a DC fast charger (50 kW), then get back at it. Reeser says that the average PepsiCo delivery route is 37 miles.

As Reeser explains on this edition of “Autoline After Hours,” started the company in Colorado because (1) he has always been a car guy and (2) that’s where he was born and raised (as had been several generations of his family before him). Back in 2008 he worked on a vehicle for the Progressive Insurance Automotive X Prize, which was a global competition to develop a car with a 100-mpg capability.

One thing led to another and after a stint at a software company, Reeser co-founded Lightning Systems, which developed a hydraulic hybrid, which uses hydraulic fluid that is pumped into a tank through the energy collected by regenerative braking; the pressure so accumulated results in driving the vehicle forward. The LightningHybrid was engineered to work on trucks and buses with a GVWR of >10,000 pounds.

But then it was onto the all-electric version.

Reeser says that this setup provides the Transit with an eMPG (the electric equivalent of the regular miles per gallon calculated with gasoline) of 66. The non-electrified version of the same Transit, he says, gets 13 mpg.

Reeser talks about the technology and the applications of the Lightning Transit to Todd Lassa, Automobile Magazine Detroit bureau chief, Autoline’s John McElroy and me on the show.

Then Todd, John and I discuss the FCA five-year plan (Jeep- and Alfa Romeo-centric, with Chrysler and Dodge being mainly peripheral); Tesla’s announced elimination of some 900 white-collar employees (Elon is going to report a profit before the year is out, come hell or high redundancies) and much more on the show.