The 2018 Dakar Rally is being held about 4,500 miles and a continent away from Dakar. The event, which is being held from January 6 through the 20th, will start in Lima, Peru, and finish in Cordoba, Argentina. A kidney-bruising time will be experienced, we’re sure, by all participants.

One long-time Dakar Rally participant in Peugeot. It won its first trophy in 1987. It took the first three places at the 2017 event.

But most people are unlikely to want to so to South America to see the Peugeot cars of Dakars. 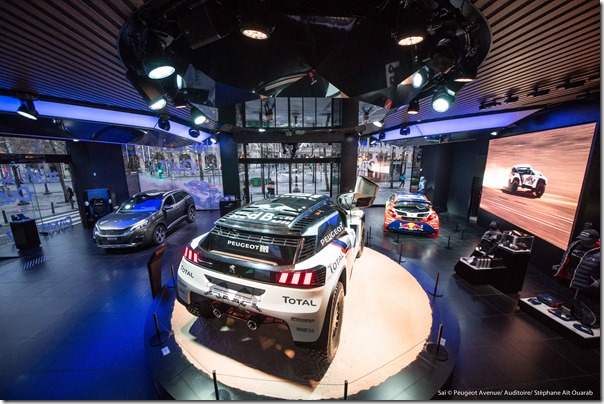 So instead, they can go to the Paris, to the Champs-Elysées, where they’ll find Peugeot Avenue Paris, something of an automotive boutique.

There they’ll find the Peugeot 3008DKR Maxi, which will be racing in this year’s Dakar (not the actual one on the floor in Paris, of course). There will be a Peugeot 205 205 T16, the car that won the world rally championships of 1985 and 1986, and was the car that Ari Vatanen piloted to the aforementioned Dakar victory.

Because it wouldn’t be an automotive experience without virtual reality (VR) involved, within Peugeot Avenue Paris there is a VR headset that will allow people, who sit in a special “dynamic armchair,” to experience what it is like to drive along with rally driver Sébastien Loeb.

Let’s face it: given the choice between Paris and, say, Pisco (the destination for the first stage of the rally), most people will probably opt to pretend they’re experiencing Dakar.

The display, incidentally, runs through March 15. And there’s plenty of swag on hand to make you feel like you were really dealing with what is among the world’s most grueling races. (OK. Not really. OK. Not at all.)