Faster and better automotive assembly can be achieved, thanks to smarter equipment. 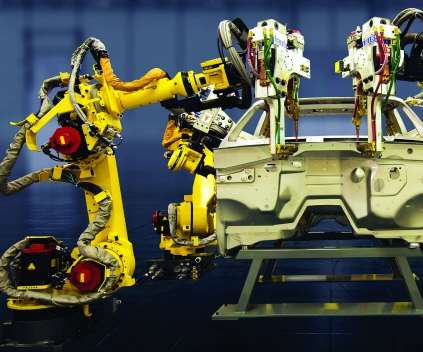 “Automotive assembly is going to change more in the next 10 to 15 years than in the last 50.” Neil Dueweke, general manager, Automotive Components and New Domestic Group; Body Structures Group, FANUC America Corporation (fanucamerica.com) bases that statement on obvious drivers such as continuously stringent CAFE standards (nhtsa.gov/laws-regulations/corporate-average-fuel-economy) and the emergence of new materials, and those more subtle, such as advancing engineering education and the computing power to drive new changes. “It’s a confluence of events I haven’t seen in the last 30 years,” the industry veteran says.

A confluence of resources in itself, FANUC America combines the former FANUC Robotics with FANUC CNC controls and ROBOMACHINE (fanuc.com/product/robomachine.html) machining centers for a multi-pronged approach to assembly problems. “There’s no one-size-fits-all answer,” confirms Louis Finazzo, general manager, Automotive Components Sales and ROBODRILL. “There are hundreds of mechanical arms with payloads from 0.5 kg to 2500 kg [1.2 to 5511 pounds] combined with encoders, end-of-arm tooling, and processing variables to achieve tremendous efficiency gains.”

Rightsizing welding processes is one example. “Resistance welding used to be air- or hydraulic-driven, with sensors that told the robot to squeeze to a given pressure and fire the current,” Finazzo explains. The result was over-welding on a scale of 30 percent on average.

FANUC has developed what it calls “Learning Vibration Control” (LVC). Combining cameras and software, gakushu (studying/learning) robots equipped with the LVC package can adjust to fine variables in fixturing or other conditions in real time and adjust their motion for up to 15 percent cycle-time improvements in spot welding processes, all with quality checks that result in tolerances not reachable manually. Intelligent interference checks avoid collisions in shared workspaces. “This is a real-world case of the robot being able to fine-tune itself to save a second or two, not only in spot-welding, but material-handling and other areas,” Dueweke says. Another innovation coming out of Rochester Hills R&D is ROBOGUIDE, FANUC’s simulation software that is capable of calculating the actual cycle time of a robot.

Integrating sensors, powerful software and data analysis tools is not only taking place in robotics, but also with precision presses. This brings the ability to gather data and generate numerous signature curves to clinching, riveting and other pressworking assembly tasks. “Press-and-hope” followed by “sort-and-toss” gives way to establishing parameters for perfect parts (at times with looser tolerances or less press force necessary than originally thought) and then pressing them with regularity.

FANUC’s ROBOGUIDE simulation software is capable of calculating the actual cycle time of a robot.

Promess Inc. (promessinc.com) has been refining and improving its EMAP (electro-mechanical assembly press) system which combines servo-controlled ballscrew press technology with a multi-axis motion control system to provide a high-precision, closed-loop press system. The servo system is sized so that no gearbox is required. This contributes to system durability (i.e., lower maintenance) and performance stability, as opposed to the standard industry practice of using low-torque, high-speed motors in conjunction with high-ratio gearboxes to obtain the required torque, according to Promess. Sensors and electronics contribute the ability to perform the assembly operations with precision. Piezoelectric sensors for measuring force, pressure and acceleration along with strain gauges and analog and digital position sensors are wired into master modules containing high-speed analog and encoder inputs with high sampling rates. The resulting capabilities for advanced data analysis include unlimited gauging points and integrated programming language with complete math functions for generating signature curves and analyzing them.

Check valves for anti-lock braking systems (ABS) are an example of how rethinking the assembly process based on the information one can gather while pressing pays off. Promess describes the requirement to build a check valve with a pressure tolerance of ±200 psi, tolerances that were later tightened to ±50 psi. To ordinarily achieve that, it would be necessary to have a precision spring, a precision ball and a precision bore that are pressed and assembled and then tested at a separate test station.

But through EMAP’s ability to monitor the force of the valve insertion, it became possible to do two things: (1) generate a press signature of a good pressure relief valve with standard components, and (2) precision-test each valve to the 1,000 psi performance level during assembly at a tolerance of ±2 psi. “Pressing to function” with a lower-tolerance “standard” spring, ball and bore, while at the same time generating a press signature that assures each and every valve functions as required, lowered the costs for components and also eliminated the need for a separate test station with its related equipment and labor. Quality, consistency and throughput go up while significant costs are removed from the production process.