Design of the 2021 Kia Sorento

The all-new compact SUV features a fresh, bold design—something that Kia is now known for
#Kia

Michael Castiglione, senior design manager, Kia Design Center America, points out that many SUVs today have been “rounded and softened for city life.” So when he and his colleagues in Irvine, California, took on the assignment to create the 2021 Sorento—the fourth generation of the three-row SUV, he says “the Kia Design team was inspired by the classic boxy SUV with crisp lines and an athletic stance.” 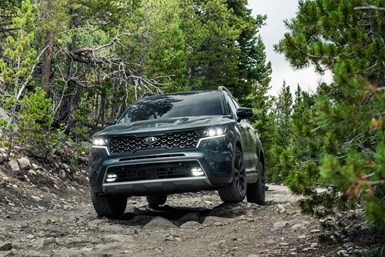 Castiglione also cites a strong crease that runs along the body side and wraps around the rear as another indicator of the “chiseled design” of the Sorento: sharp, not soft.

It’s not that this vehicle is likely to spend a whole lot of its existence crawling rocks—although one of the trim levels, the X-Line SX-Prestige AWD, includes standard torque-on-demand AWD with center locking differential and downhill descent control; an 8.3-inch ride height (1-inch higher than the other Sorento models); 20-inch alloy wheels (the largest wheels ever offered on a Sorento), so it can conceivably crawl—but the design team wanted an execution for the vehicle that speaks to “strength and luxury.”

Still Castiglione mentions that the Sorento has an “urban, friendly size,” which indicates where most of these are going to be found. “I don’t think I’ve ever worked on a vehicle where trim levels contributed so much to its identity,” Castiglione says. For example, he notes that the X Line “begs to be covered in mud,” while the SX model, with the satin exterior trim elements, is something that he’d be “hesitant to get dirty.” For the past several years Kia designers have been putting a “tiger nose” front on the company’s vehicles, and it is no different for the ’21 Sorento. In this case, he says that the shape of the DRLs, thin strips of light, are meant to resemble “the white stripes under a tiger’s eyes.”

The tiger isn’t the only animal that is influential to the design of the Sorento. There is a shark fin shape on the C-pillar, and Castiglione says that that same triangular shape can be discerned in other areas (e.g., the roof-mounted spoiler). At launch, to be later this year, with vehicles rolling out of the Kia plant in West Point, Georgia, there will be three powertrains offered:

Next year, according to Bill Peffer, Kia Motor America vice president of Sales Operations, a plug-in hybrid will also be available, with the 44-kW motor replaced with a 66.9-kW motor (and the hybrid’s 5 kWh battery replaced with an 8 kWh battery).