John Manoogian II is part of the design fabric of the auto industry. He shares insights on this edition of “Autoline After Hours”
#Cadillac #GeneralMotors #Tesla

John Manoogian II spent 35 years on the Design staff at General Motors, with his last position being Director of Exterior Design at Cadillac, from which he retired in 2009. He was responsible for designing the presidential limos for George Bush and Barack Obama. While vehicles like the Cadillac CTS-V sedan, coupe and comprehensively badass wagon are probably designs that resonate more strongly with auto enthusiasts everywhere, think about it: he designed presidential limos. 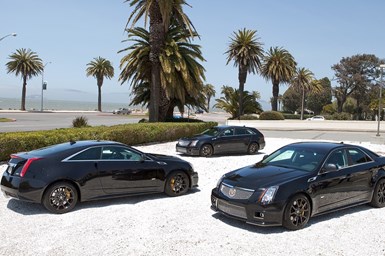 In the years since leaving GM he’s kept busy, having done things like being an instructor in Transportation Design at the College for Creative Studies (CCS) to his current position as director of Design for Quadrobot Corporation.

About Quadrobot, Manoogian says he was recruited to the role by founder and CEO Mike Tianye Wang, who had been one of his students at CCS (Manoogian was obviously a good teacher, as he explains his approach to pedagogy as not telling the students whether a particular design is bad or should look like this (“Then it would be my design”), but rather by asking them whether they feel that they have fulfilled the requirements of the brief). 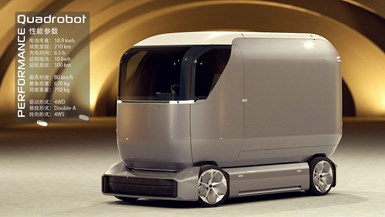 The Quadrobot U1 is an autonomous, electric delivery vehicle that will have its initial operation delivering mail in China within a geofenced area. Then, Manoogian says on this edition of “Autoline After Hours,” the plan is to come to the U.S. with the vehicles, including vehicle assembly in a Quadrobot facility in Madison Heights, Michigan (a northern suburb of Detroit).

The pod-like design (done by Wang, Manoogian says) on the “skateboard”-like chassis gives rise to a discussion with Autoline’s John McElroy, Lindsay Brooke of SAE International, and me about “styling” versus “industrial design.”

Manoogian is strongly in favor of industrial design as it is, he says, about solving a particular problem, not simply, in effect, something added simply for effect.

As the U1 is in the truck category, naturally the topic quickly turned to the Tesla Cybertruck. Manoogian, who isn’t exactly taken with the design per se, acknowledges that the Tesla team has pulled off something that is completely in keeping with their approach of maintaining distinctiveness in the market. Something, he suggests, that would be useful for other OEMs to do. 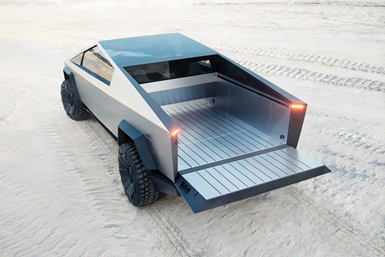 The Tesla Cybertruck carries a lot of conversation, too. (Image: Tesla)

One of the reasons why he thinks that Tesla’s Franz von Holzhausen and his team are able to create designs of things like the Cybertruck is likely a result of von Holzhausen and Musk having regular conversations about things. Apparently, that’s not the rule of thumb within conventional automotive OEMs.

About Those Super Bowl Ads

As the Super Bowl had been played the previous Sunday, and as there were eight automotive ads presented during the game, there is an exchange about those ads, with particular focus on the Hummer EV, as while Manoogian had been at GM during the heyday of the original consumer Hummer, he didn’t work on the design.

In addition, we discuss an array of subjects, including the earnings reports of GM ↑ and Ford ↓, the introduction of the Gen 5 Cadillac Escalade and the effects of the coronavirus on the auto industry.