Alfonso Albaisa, senior vice president, Global Design, and Satoru Tai, executive design director, Nissan Motor Corp., knew what they had to do when designing the 2021 Nissan Rogue, a compact crossover that was last redesigned for model year 2014: “There is no vehicle that we sell more of than this one,” Albaisa said. 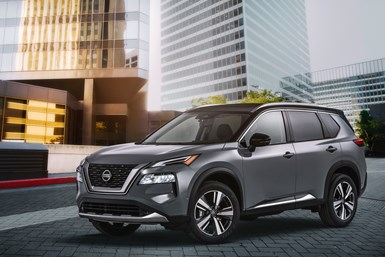 This is amplified by Tai, who stressed, “This is so important for us. And successful. We were thinking: Keep the Rogueness and create a future direction for Nissan.”

So consider: A highly popular vehicle in the portfolio, but one in a segment that has nothing but strong competitors (e.g., Toyota RAV4, Honda CR-V). Yet Albaisa said: “One of the satisfactions that a customer has is something that is fresh and exciting and satisfies needs.”

On the one hand: make it different. On the other: keep the character the same.

Which has given rise to this design.

Overall: “We wanted to make it more rugged, adventurous in feel,” Albaisa said.

So here are things they did to accomplish that.

The hood is straighter and the front blunter. “This provides truly an SUV feel,” Albaisa said. Tai said the front end has the “new Nissan face.” They’ve retained the V-motion grille treatment characteristic of Nissan models for the past few years, but Tai said for the 21 Rogue they’re using “a double-V motion,” as there is a thin chrome stripe that is separate from the wider chrome V-surround by a gloss black strip. About the headlamps Tai said that when they are activated “there is a large signature,” which is “an evolution of the current Rogue.” The lamps are integrated into the front fenders in a way that contributes to what Albaisa described as “dynamic.”

This is an exercise in horizontals. Albaisa pointed to the bone line, the roof and the hood: all straight. He said this provides “a rugged, full, strong, assertive feeling at the glass. Tai pointed to a U-shape highlight in the body side that starts at the D- and A-pillars and goes down to the shoulder line and across. Tai said that the intention from the start was to consider the vehicle with a two-tone paint treatment with the roof and body having different colors. To optimize that they’ve created a thin chrome stripe that travels from the A-pillar to the D-pillar at the top of the side glass. About the two-tone paint, Albaisa said, “The two-tone paint makes the body feel stronger and look more rugged.”

Here it is evident that both the side glass and the backlight are more vertical than has been the case, thereby providing what Albaisa describes as a “tough SUV feeling” while providing “increased functionality.” Presumably this means that it enhances the cargo capacity. While he said the front fenders are “dynamic,” he described the rear fenders as “strong and muscular.”

Again, a horizontal: “A thin, horizontal IP from A-pillar to A-pillar,” Albaisa said. “We wanted to provide spaciousness, and also provide a protected feeling,” Tai said. Although the outside of the vehicle emphasizes ruggedness, Albaisa said on the interior they’re providing a “mixed sense of technology and luxury.”