Current infotainment systems leave a lot to be desired. What needs to change?

Users want the same capabilities in their vehicles that they can access on a smartphone.

Users want the same capabilities in their vehicles that they can access on a smartphone, explains Orawannukul, whose job is to identify trends and help customers design interfaces for next-generation vehicles. At the same time, she adds, interfaces need to be optimized for cars, better coordinate with OEM branding and overall styling, minimize driver distraction, incorporate new technologies, take into account a wide variety of user needs and provide quick access to useful and/or entertaining features.

Most interfaces to date haven’t lived up to expectations. In the latest Consumer Reports study, for example, only 70% of respondents were satisfied with making calls through CarPlay. That was the top-ranked interface for any infotainment system. Navigation, initiating music and other audio features, and reading and composing text messages all scored worse (55%-65% satisfaction). CarPlay fared the best, followed by built-in systems and Android Auto. 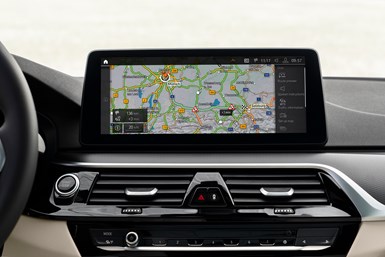 BMW’s infotainment system is one of the best rated in the industry (2020 5 Series pictured).

In addition to simple-to-use controls, Orawannukul praises Tesla for integrating infotainment design with the rest of a vehicle’s styling. “Brand consistency matters,” she declares, noting that this is a key purchasing influence that, if executed poorly, can create an identity crisis. Tesla’s touchscreen displays are much more uniform and cleaner than those of most traditional OEMs, Orawannukul says because they are designed from the ground up as part of the overall interior.

In some cases, companies have tried to bring futuristic concept designs directly into production models. This typically isn’t a good look. Orawannukul says such designs tend to use too much neon and metallic styling that may appeal to some men but can alienate women.

The old adage of form follows function should be strictly adhered to with infotainment controls.

Just because a design is symmetrical doesn’t make it good, Orawannukul asserts. Moreover, she maintains that anything ornamental or redundant must be eliminated. “Today’s interfaces can be daunting and complex,” she says. Instead, they need to be much more approachable and usable, especially for elderly and less tech-savvy drivers.

There also are some general principles that can help in terms of button (at least 1x1 cm) and font size (1.5 times larger for touchscreens than other devices). Orawannukul says Fitt’s Law is a good rule of thumb for determining how far to place controls from a user—the smaller the touchpoint, the closer to the driver it needs to be located. Touchscreens also need to provide a way for older drivers to anchor their hands on an adjoining surface. This can help drivers steady themselves and find the intended control.

Infotainment systems have benefited from employing smartphone-type designs. But the trend should only be taken so far. “Cars aren’t smartphones on wheels,” Orawannukul cautions. Vehicle interfaces need to be treated as safety critical systems, where the user’s primary focus is driving.