Here’s who and what’s behind the development of the 2016 Fiat 500X, arguably the most important car that the company has on offer.
#Dodge #Carbon #HP 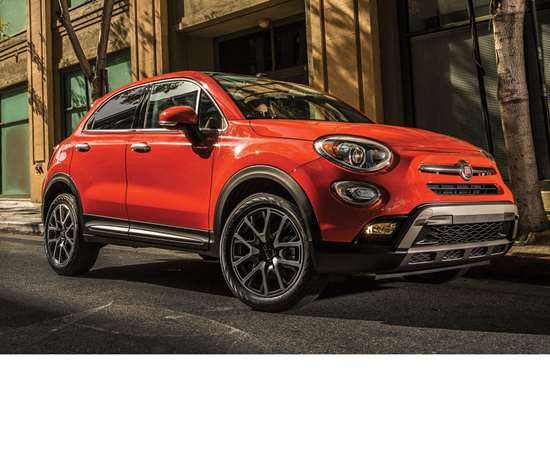 Although the 500X is based on the same platform as the Jeep Renegade, although it has AWD capability, this is a stylish Fiat and as such if it is a crossover vehicle, it is an urban crossover.

Danilo Tosetti, Fiat senior designer, born in Asti, about 35 miles southeast of Turin, says, “I like very much to be in Fiat because I am Italian and Fiat is Italian and creates original and iconic vehicles. It is my dream.” And his dream is manifest in the design of the Fiat 500X.

Tosetti says that he included various 500 design cues in this vehicle, such as the vertical tail lamps flanking the hatch. Around front, there are the round head-lamps and the “whiskers” that extend from the Fiat badge, and the clamshell hood.

The interior combines a couture flair with a robust physicality, combining the aspects of this being an iconic 500 but one that has AWD functionality.

Ask someone who has worked someplace for more than a few years when they were hired. Chances are, the answer you’ll get is a month and a year. Ask Danilo Tosetti, senior designer, and he responds, “Second of February, 2008.” He adds, his English surrounded in an Italian accent, “I’ve been at Fiat for seven years. It has been a good experience for me. I like very much to be in Fiat because I am Italian and Fiat is Italian and creates original and iconic vehicles. It is my dream.”

And were you to be working your dream, you’d know precisely what your start date was, too.

Tosetti, who attended Istituto Europeo di Design (European Institute of Design) in Turin, where he studied with a number of people who are now his colleagues, had an internship at Fiat in 2007. During that time, he designed a Fiat Panda, circa 2025. He recalls that this “very futuristic project” was intriguing to him because it helped him think about the role of and types of automobiles in the future. “I created something very, very simple,” he says, a car that has autonomous driving capability. “It’s like the Google car now,” Tosetti remarks.

But Tosetti notes that at the start of the project, “the family of the 500 didn’t exist.” Realize that they were looking at making what is arguably a major addition to what really wasn’t even a lineup at the time, so whatever they did would have an outsized impact. “We knew the strength of the 500, so we did everything we could to create something that was very 500, but at the same time very different. That was our challenge. We also wanted to communicate that the 500X would be a new way to be a Fiat.”

For one thing, this vehicle is substanti-ally larger than the 500, but so is the 500L*. But while the 500L is arguably a scaled-up 500 with an additional set of doors, the 500X is a crossover, which means that its stance is different than that of a car, small or large. So an objective was to keep the “500ness” of the original, but, at the same time, to break some new ground from the point of view of providing a different approach to what the 500 could be.

Want to know what pressure is?

Consider the way that Jason Stoicevich, vice president FIAT Brand, describes the 500X: “This is the halo of the brand. The game-changer for this brand.”

He points out that the 500X is the first car that people from Auburn Hills and Turin jointly developed.

(Or, as Matt Davis, head of FIAT brand product marketing, points out: “This was not taking an existing car and homologating it.” The sheet was clean when the program commenced.)

This halo was designed, engineered and built from the ground up to capture some of the massively growing small crossover market, pure and simple.

Want to know what extreme pressure is?

Consider the way that Olivier Francois, president and CEO, Fiat Brand, describes the 500X: “This is a defining product for the brand.”

Yes, the man who is in charge thinks that this is the car that may be (comparatively) small, but which has HUGE implications for Fiat, not only in the U.S.

But the reason why, small numbers notwithstanding, Fiat is important, is because they’ve discovered that nearly 9 out of 10 customers are not Chrysler, Dodge, Jeep, or Ram buyers. These are new people coming into the FCA franchise.

While Francois acknowledges that Fiat is not going to become a major brand in the U.S. market—he says Fiats are “cute, small, spirited, efficient—everything that makes it very challenging for this market”—he also undoubtedly wants to extend the reach of the brand, which means that Tosetti had the eyes of the head office keenly upon his work.

The 500X was designed at Centro Stile in Turin. Tosetti says that he worked to integrate many of the design cues of the Cinquecento into the car. At the front, there are the double round headlamps. The trapezoidal nose. The so-called “whiskers” that flank the Fiat badge. The clamshell hood. From the side, there’s a character line that wraps around the vehicle, and the trapezoidal greenhouse. The rear features a forward-canted hatch with a rounded backlight. The tail lamps are vertically oriented.

All of these say “500” with a Piedmontese accent.

Because this is a crossover, or as Tosetti describes it, “a 500 that has been pumping iron,” there are bigger wheels and a greater ground clearance, as well as cladding around the lower areas to indicate a certain stylish toughness.

On the inside of the car, Tosetti says there was attention to details. The quality of the materials was an area of concern. And, of course, there are modern tech touches, such as available Uconnect 6.5 radio with a 6.5-in. high-resolution touchscreen and navigation, Bluetooth streaming audio, Uconnect Access Via Mobile, a 3.5-in. color thin-film transistor (TFT) cluster display, Keyless Enter ‘n Go, and heated front seats and steering wheel.

For all that, there is still a certain playfulness of the interior design.

Tosetti describes the design of the dash-board as being robust—“like Popeye.”

The 500X, says Art Anderson, vehicle line executive, is based on the “small-wide 4x4” platform. Anderson and the name of that platform may be familiar to some people because he worked on the Jeep Renegade compact SUV, and the Renegade and the 500x share the same platform.

Anderson points out, however, that while the Jeep is tuned to be an off-road capable vehicle, the Fiat is tuned for on-road manners.

The 500X is available with either a front- or all-wheel-drive. The all-wheel-drive system utilizes a disconnecting rear axle to improve efficiency by reducing parasitic loss when all-wheel drive is not needed.

Anderson explains that the 500X offers the “Fiat Dynamic Selector” system, which allows the selection of driving modes: Auto, which adjusts engine calibration for smooth, fuel-efficient operation; provides higher servo assistance for the electric power steering; and adjusts the shift points for low carbon dioxide emissions. Sport, which adjusts the engine calibration, the ESC system, and the steering for a sportier feel; if the car has AWD, the transmission is adjusted for lateral dynamics. Traction +: this is for maximum low-speed traction on slippery or off-road surfaces through the adjustment of chassis controls and by providing a more-direct engine response.

To make sure that the vehicle is robust, Anderson says that approximately 70% of the body structure is made with high-strength steel, which also helps make the vehicle comparatively light: 2,967 lb., compared with the similarly sized 500L at 3,203 lb.

Speaking of making things, the 500X is built in an assembly plant in Melfi, Italy, alongside the Jeep Renegade.

Although it is somewhat odd to think of an “Italian icon” being produced next to something someone might likely associate with, say, Toledo, Ohio, the 500X is arguably more Italian as regards its build than the 500 or the 500L models available in America.

That is, the 500 is assembled in a plant in Toluca, Mexico. The 500L hails from Kragujevac, Serbia.

Speaking of places, according to Stoicevich, there were over 3-million miles of road travel taken for the development of the 500X. That’s on top of 500,000 hours of lab testing and 2.5-million hours of engineering.

They wanted to make sure they got it right.