Scott Anderson works with the Ford Truck Studio Design Team. His position on the team: Interior Design Manager. . .on the Bronco Sport, one of the most significant vehicles that Ford launched in 2020 (along with the 2021 Ford F-150 and the Mustang Mach-E). The Bronco Sport is the first member of the Bronco family, with the bigger brother coming early in 2021. 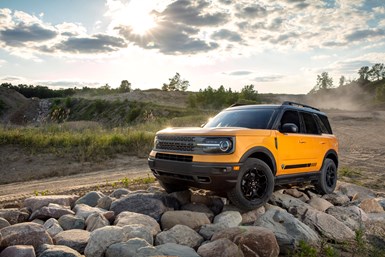 One way to put the Bronco Sport into context vis-à-vis other compact sport utility vehicles is to know that 4x4 capability is standard on the vehicle: there isn’t a front-drive variant that allows someone to have the “look” of capability without the real thing.

When asked about what vehicles they benchmarked when developing the design for the Bronco Sport, Anderson says that it wasn’t benchmarking so much as it was an awareness that there are things like the Jeep Renegade and Compass out there. And as Anderson had been at Jeep at an earlier point in his career and had the opportunity to the be leader designer on the 2008 Jeep Renegade Concept, his awareness is rather deep. (He also spent time in the Chevy Truck Studio, so he is well versed in vehicles that have to perform as part of their daily existence.)

But the development of the Bronco Sport was predicated on some rather deep research as people went out and spent time with people who lead the sort of lifestyles that are encompassed by the term “Challenge Seekers”: people who are driven to be mountain biking, kayaking, snowboarding, surfing, hiking. “They are what drove the original sketches,” Anderson says. The designers didn’t start sketching some cool lines and selecting excellent colors. The space in back not only looks good, but it works, as well.

“The researchers went out and talked with people.”

They shared this with the designers.

Who then thought about their brief by creating people who would actually use the Bronco Sport.

Anderson references “Jann.” She lives in Seattle. She kayaks every day. Which means that (a) she needs a convenient way to strap her kayak on the roof and (b) she has to put her wetsuit—which, let’s face it, is going to be wet—in the back.

And then the Bronco Sport design was developed.

So you’ll see that there is a stepped roof on the Bronco Sport so that “Jann” is going to be able to get the kayak up there. On the surface of the rubberized material in the back there are Y-shapes which channel run-off water for easy cleanup.

“To hear people”—real people, who lead to the characters the designers created—“tell you what’s wrong with today’s vehicles gives you a better way to understand how to fix it,” Anderson ways. You’ve got stuff. They’ve got a place to put it.

Speaking as though he is a series of customers, Anderson says, “We want accessible tie downs. We want to put wet stuff in a place that’s separate from the dry. We want surfaces that are easy to wipe down, not carpeted seat backs.”

And all of those boxes are checked on the Bronco Sport.

They put in MOLLE straps for things to attach to. There are silicone-sealed control switches. They installed a storage bin under the second-row passenger-side seat to toss in groady gear. They put in zippered seatback pockets. There are LED floodlamps on the liftgate. There are channels and rails for handling gear, such as mountain bikes that can be handled in the back.

As Anderson puts it of the overall design of the Bronco Sport: “There is a balance of the inside and the outside working together.”

The message that the design delivers that this vehicle is functional, with that function being that which would be appreciated by those for whom the so-called “G.O.A.T.” capability—goes over any type of terrain—is an expectation.

Anderson describes the Bronco Sport as being a “serious machine.” Would a “non-serious” ute put a bash plate on the bottom?

This is not the stuff, say, of the Ford Escape.

Which brings us back to the design.

Anderson says that an Escape has a fluidic shape while the Bronco Sport has flat surfaces everywhere. One conveys stylishness. The other function.

And while the exterior “reads flat,” Anderson says, “It really isn’t a flat form; there is some warmth and personality in the surface. There is detailed work, such as the chamfer by the cutline.”

On the inside, he says that he wanted to make sure that there was, on the one hand, clearly mechanical forms for the functional elements, but softer surfaces for the things that people touch. “Human stuff around the humans,” he says. Let’s face it: this is a vehicle that people are going to interact with on a daily basis, so to go full-out machine tool on the interior would be off-putting after the first 20 minutes or so.

Anderson sums the design and engineering with an appropriate observation that is borne out by the Bronco Sport: “It is everything it needs to be and nothing more.