The compact crossover segment is about to explode. And Nissan is going to be giving it a little Kicks.
#Toyota #Ford #HP 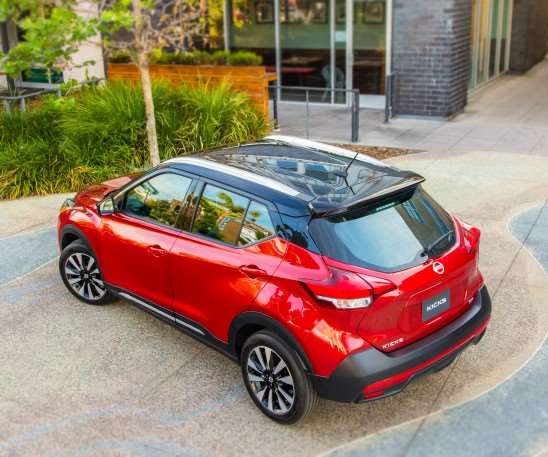 The 2018 Nissan Kicks rounds out the company’s offerings in the utility space. This compact crossover joins the Rogue Sport, Rogue, Pathfinder, Murano, and Armada, giving the company something in all primary categories.

This isn’t the production Kicks but the Kicks Concept, that was unveiled at the São Paulo International Motor Show in October 2014. The vehicle design included participation of Nissan Design America in both San Diego and Rio, as well as the Nissan Global Design Center in Japan. When the Kicks Concept was first shown, Taro Ueda, vice president, Nissan Design America, said, “It’s not only just for the Brazilian market, but we capture the idea of Brazil and then we apply it to our global design improvement. Making a stronger design lineup for future Nissan designs.”

The Kicks features an interesting approach to audio: the Bose Person Plus system that includes, among its eight speakers, one that is fitted into the driver’s headrest, thereby providing tailored sound for the person who is most likely to be in the vehicle the greatest amount of time. (While the car seats five, the demographic is people who are single or couples, no kids.)

Even though the Kicks is referred to simply as a “compact crossover,” the word utility was once part of the crossover nomenclature, as it began to get its own identity, separate from “sport utility vehicle.” So utility that Kicks brings takes the form of cargo space, as in 25.3-ft3 behind the second row and 53.1-ft3 with it folded.

The dashboard design is said to be based on the “Gliding Wing” theme. What is notable is that that 7-inch color touchscreen on the IP isn’t an option for the high-end versions but is standard on every Kicks.

If you want to get a sense of the international nature of the auto industry, then an exemplary vehicle to consider is the new 2018 Nissan Kicks compact crossover.

The vehicle had its initial existence as the Kicks Concept at the 2014 São Paulo Motor Show in Brazil. Given the popularity of the model, it went into development. Nissan Design America personnel in San Diego worked with their colleagues at a satellite studio, Nissan Design America-Rio. The design teams were orchestrated by senior personnel based at the Nissan Global Design Center in Japan.

The production Kicks is produced for the Latin American market at Nissan's Resende Industrial Complex in Rio de Janeiro State. It is being produced for the U.S. market (as well as others) at the Nissan facility in Aguascalientes, Mexico. (And while in that part of the world it is worth noting that Daimler and the Renault-Nissan Alliance have established a 50:50 joint-venture manufacturing complex named “COMPAS” (Cooperation Manufacturing Plant Aguascalientes), where they are building Mercedes and Infiniti products for global markets, so there is a lot of production experience in that vicinity.)

And let’s consider the competitive set that the Kicks is facing off against. There are the Kia Soul, which is manufactured at the Kia Gwangju Plant in South Korea; the Hyundai Kona, built at Ulsan Plant 1 in South Korea; the Ford EcoSport, which comes out of the Chennai Vehicle Assembly and Engine Plant in India; and Toyota C-HR from Toyota Motor Manufacturing Turkey in Sakarya. Which is to note that when it comes to vehicles of this nature, which can be broadly defined as “entry” crossovers, there is an evident international flavor to them. There is also a potentially huge demand for them, as Nissan’s Rob Warren, director and chief marketing manager, says that in 2017 vehicles in that category accounted for 119,700 sales in the U.S., a number that they expect to grow by 156 percent to 306,000 by 2022.

A quick word about what “entry” means in the context of the Kicks. The starting MSRP for the crossover is $17,990. The top-of-the-line SR trim with the Premium Package has an MSRP of $21,290. And while it might be thought that they’ve produced some sort of thrifty model, that’s certainly not the case, presumably knowing that their target audience for the Kicks—who are “young-minded and creative” and likely to be from 25 to 35 years old—know the difference between “thrift” and “value,” and if there is any portion of the Kicks that seems to fit into the first category, it is the headliner, which is the classic felt-like material, commonly known as “mouse fur.”

Short of that, the vehicle over-indexes on what it provides, as in there being a centrally mounted, 7-inch full-color touch-screen display with Bluetooth streaming audio—across the board. There is standard automatic emergency braking. And then the available tech comes into play, with blind spot warning, rear cross-traffic alert, around-view monitor, Apple CarPlay and Android Auto, Bose Personal Plus audio system (this is an absolutely clever system that features, in part, two 2.5-inch neodymium speakers that are built into the driver’s headrest), and more.

The vehicle is based on the Nissan V platform, which it shares with the Versa Note and Versa sedan. On the outside, the Kicks is compact—it features a wheelbase of 103.1 inches, an overall length of 169.1 inches, a width of 69.3 inches, and a height of 62.4 inches—it is reasonably roomy inside, with passenger space of 54.6-ft3 for the front (the 43.7-inches of front leg room and 40.7 inches of front head room are said to be best in class), 39.3-ft3 for the rear, and cargo space of 25.2-ft3 with the second row upright (which is said to be better than the Soul, Kona, EcoSport, and C-HR) and 53.1-ft3 with it folded.

The vehicle is powered by a 1.6-liter DOHC four that produces 125 hp @ 5,800 rpm and 115 lb-ft of torque @ 4,000 rpm. It is mated to a continuously variable transmission. As the Kicks has a curb weight of just 2,672 pounds, weight per horsepower performance is very good. What’s more, it returns better fuel economy than the non-hybrid versions of the competitive set: 31 mpg city, 36 highway, 33 combined.

Hiren Patel, project lead design, Nissan Design America, worked on the Kicks project when it was in the studio(s) for the concept. He says that one of the things that they did when developing the design of the vehicle was to spend time in Rio. One of the things that he and his colleagues realized while sitting in sidewalk cafes that for the most part, when there was a vehicle driving by they were generally able to see the greenhouse more than any other part of the car. So based on that they decided that they wanted to create a very futuristic top portion of the vehicle. Then below that, pick up the more traditional SUV-like design cues, based on protective cladding and the like.

The Kicks is available in five different roof-body color combinations, with the availability of three black roofs, one white and one orange. According to Patel, while some vehicles on the market are available with similar two-color tops and bodies, when they were creating this vehicle they took that color combination into account, which is different than other vehicles with the combinations. As a result, Patel suggests, there is greater integration of the color pallet.

Here’s something to consider: In the U.S. alone, there are, according to Erich Marx, director of Marketing, about 33-million people fall within the 25- to 35-year-old demographic. Odds are good that the Kicks will do well predicated on its design, amenities, and, let’s face it, price.