Do Auto Shows Have a Future?

Things are looking shaky for the international events
#Chevrolet

One of the topics that gets kicked around automotive circles nowadays is whether auto shows have a future. The reasons why they have become increasingly less effective include the medium you’re reading this on right now, as well as the costs borne by the OEMs in creating massive displays and then having them constructed and deconstructed in exhibit halls across the country and, in some cases, around the world.

As for the first reason, prior to the proliferation of browsers on desktops and phones, information reported about the new vehicles being introduced at a given show had some time lag to it. Broadcast media could have it the same day and daily newspapers a day later. But for depth-of-coverage, which is what the print magazines provide, there was a substantive delay. 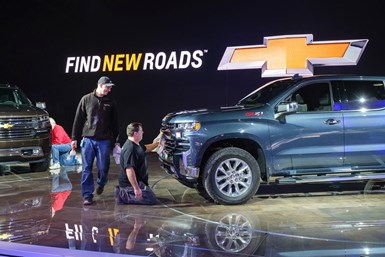 Prepping the Chevy stand at the 2019 NAIAS. (Photo: Chevrolet)

Still, for automotive journalists the major auto shows were must-attend events because that would be the first time they’d have the opportunity to see new vehicles. While some OEMs would provide embargoed “sneak previews,” by and large most of the reveals were of things that had been kept under wraps.

To be sure, there were sometimes leaked photos, but again these were delayed before people saw them. Perhaps Autoweek—when it was still a weekly—might have gotten it out there in a reasonable amount of time, but otherwise there was a delay.

Now if there is a leak, it gets picked up by one website and is then rapidly disseminated by others. It is hard to keep a secret. (And even the aforementioned Autoweek went to a biweekly print schedule for a while before becoming a digital-only publication.)

Whereas once automotive journalists whose beat it was to cover new vehicles had to be at the major auto shows, it is possible to perform the coverage from one’s desktop. And given the economic straits that most publications are in right now—whether they’re printed or digital—travel budgets aren’t what they once were, so that virtual coverage makes the business side of the house all the happier.

Then there is the issue of the cost of building the displays. When marketing budgets weren’t as tight as they are now, it was typically the case that an entire display would be built for press preview days then taken down and replaced for public days.

Nowadays, however, with budgets being what they are, more and more OEMs are looking at the number of vehicles they sell in a given market and then determine whether or not they’re going exhibit at the region’s show. For example, while there was real concern when Mercedes said it was no longer going to be at the Detroit show (a.k.a., the North American International Auto Show), it wasn’t hard to realize that there aren’t a whole lot of S Classes sold in the Motor City—heck, the number of even C Classes and GLKs is comparatively small. What’s the point?

What some OEMs have found to be more cost-effective is to hold their own events, whether it is for the media or for select customers/prospects. By doing this they can get considerably more time and attention than they can by competing with a number of other OEMs.

This year the Detroit show has moved back from January to June and is going to be reinventing itself, being, the organizers hope, something more akin to the incredibly South by Southwest event in Austin than a giant dealership. There is a lot of energy going into this execution. Clearly the organizers realize that something had to change, so they’re pretty much changing everything.

But extraneous events can occur that no organizer can control.

In January it was announced that the Frankfurt Motor Show—after nearly seven decades—would be no more, with the IAA, the show organizer, looking for another German city to host the event. Arguably one of the factors that led to decreased attendance at the last Frankfurt show was the series of protests held by environmental groups. You can’t control that.

Then the Beijing Motor Show, which was to have been held last month, has been postponed until late April due to the coronavirus—and that may be wishful timing for the organizers of that event.

And the Geneva Motor Show has been completely canceled due to Swiss authorities banning all events with more than 1,000 attendees.

The coronavirus is nudging shows in the direction some are hoping to avoid.