According to the folks at Dodge, the Charger SRT Hellcat model—that’s the one with the supercharged 6.2-liter HEMI Hellcat engine that produces 707 horsepower and 650 lb.-ft. of torque—has a top speed of 204 mph. That, they say, makes it the quickest, fastest and most powerful sedan in the world.

The Dodge Challenger has two fewer doors than the Charger. That’s not entirely the reason why the Challenger SRT Demon has the fastest 0 to 60 mph time of any production car in the world: 2.3 seconds. But it helps.

Doors, of course, add mass to a vehicle. 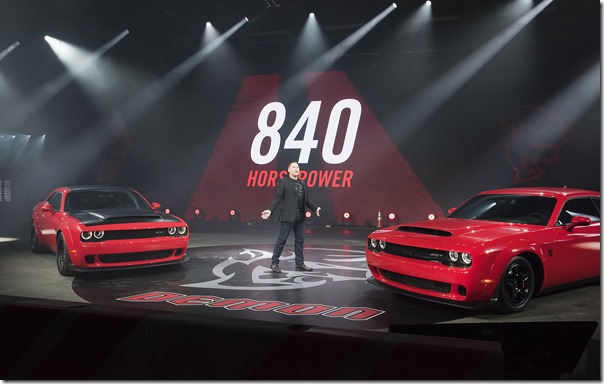 In fact, the curb weight of the Charger SRT Hellcat is 4,535 pounds and the Challenger SRT Demon is 4,280 pounds.

It is not all about the doors, of course. In developing the Demon, the engineers went at mass. Hard.

They removed the front passenger seat and seat belt to save 58 pounds, and took another 55 pounds out by removing the rear seat, restraints and floor mats. According to Tim Kuniskis, Head of Passenger Car Brands – Dodge, SRT, Chrysler and FIAT, FCA–North America, the passenger seat can be ordered as an option for $1, and the rear seat for another $1.

They removed 16 audio speakers, the amplifier and associated wiring. The weight save there is 24 pounds. Kuniskis says that that can be added as a option, as well. For something more than a buck. A manual tilt/telescope steering column takes out 4 pounds, and two more through the elimination of the park sensors and associated module.

Oh, and in addition to the focus on weight savings, there is the matter of the 6.2-liter HEMI V8 that produces 840 hp and 770 lb-ft of torque. That’s said to be the highest horsepower for a V8 production car engine ever produced.

(Note here the emphasis on production car. Yes, the Demon is a produced in a factory, not a garage, although the production run—at least for now—is limited to 3,000 units for the U.S. and 300 units for Canada. Apparently there’s more interest in drag racing in the U.S. than north of the border. It should be noted, however, that the Demon is produced along with other, less incendiary vehicles, at the FCA Brampton, Ontario, Canada assembly facility.)

About that Demon engine.

Yes, the architecture is that of the 707-hp, 6.2-liter supercharged HEMI Hellcat V-8. But they’ve made a number of not-trivial changes, 25 changes, in all. Like using a 2.7-liter supercharger instead of a 2.4-liter unit. Using two dual-stage fuel pumps instead of one. Deploying a high-speed valvetrain, strengthened con rods and pistons, and improving the lube system.

To provide the air for the supercharger, there is what is called the “Air-Grabber” hood: at 45.2 square inches, it has the largest production air scoop of any production car. (It is supplemented by the “Air-Catcher” at the driver’s side headlamp and an inlet near the wheel liner.

Not entirely surprising, the engine is the first in a production car designed to run on 100+ unleaded high-octane fuel. However, the car leaves the factory with a powertrain control module configured for 91-octane premium unleaded.

(The estimated EPA numbers are 13/22/16 mpg city/highway/combined. Numbers that no Demon owner is likely ever to see.)

The car has a TorqueFlite 8HP90 eight-speed automatic transmission, which is also used in the Hellcat. However, for the Demon, there is an upgraded torque converter to deliver an 18 percent increase in torque multiplication. The stall speed is increased 11 percent.

There is what’s called the “TransBrake, which locks to transmission output shaft to hold the car in place before a standing start: the driver can run the engine up to 2,350 rpm without overpowering the brakes. This means that up to 15 percent more torque at launch can be obtained. TransBrake preloads the driveline so that there is full engine torque delivery to the rear wheels 150 milliseconds after the car is put into gear.

TransBrake is supplemented by Torque Reserve, which comes into play once the engine speed passes 950 rpm, at which point it closes the bypass valve to essentially prefill the supercharger with boost and it manages fuel flow to the cylinders as well as the spark advance or retard to balance the engine rpm and torque. All of which means that there is more than 8 psi of boost at launch and up to 120 percent more engine torque.

One more thing. The Demon is street-legal. It comes with an FCA US LLC factory warranty, including three-year/36,000-mile limited vehicle warranty and five-year/60,000-mile limited powertrain coverage.

Just like a regular production car, which the Demon Challenger certainly isn’t. 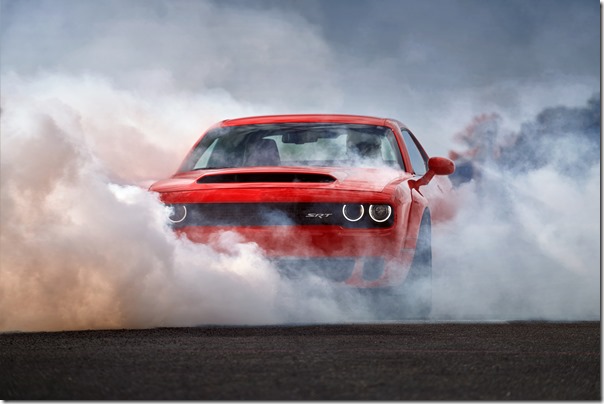