When Mercedes unveiled the new S-Class in Shanghai last month, there was, understandably, a lot of attention paid to such things as its 48-volt integrated starter alternator, electric booster compressor, and getting-closer-to-autonomous DISTRONIC Active Proximity Control and Active Steer Assist.

Clearly, Mercedes is pushing forward with technology in its flagship vehicle. And it announced that it will be bringing more to bear on the S-Class, such as a plug-in hybrid powertrain that will provide the luxury sedan with an expected all-electric range of 31 miles. 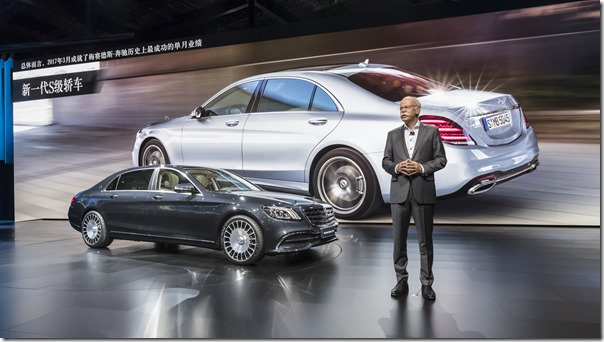 Dr. Z and the new S-Class in Shanghai

As Ola Källenius, responsible on the Board of Daimler AG for Group Research and Mercedes-Benz Cars Development, put it, “The development of the new S-Class was extremely extensive. With a whole series of new features and functions the S-Class remains the technological pioneer.”

What garnered less attention is another aspect of the new S-Class, the spa-like nature of the vehicle.

According to Mercedes, its “ENERGIZING comfort control” system, which integrates such things as the climate control system (which, incidentally, provides the ability to add fragrance to the cabin), the seats (heating, cooling, massage), lighting (“64 colors, ten color worlds and three different lighting zones”), and music, is the first of its kind in the world in series production.

The system allows the driver to select from six programs:

Why simply drive when you can luxuriate?