According to the Texas Department of Motor Vehicles, Texans really love their trucks.

Each year the OEMs that produce pickups make their way to the Texas State Fair to make sure that they’ve visible to the truck-hungry public.

So it may come as no surprise that Ford has announced the Dallas Cowboys edition F-150. 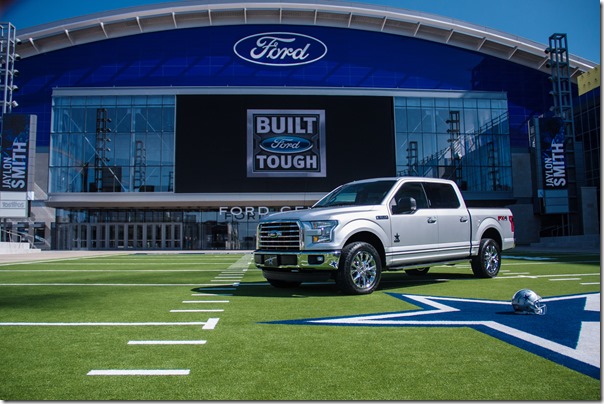 This is an XLT model with Chrome Package (a little bright bling) that’s painted the silver found on the Cowboys’ helmets. There are Cowboys edition badges, blue-white-blue rocker panel striping, 20-inch chrome wheels with a Cowboys star center caps, and more.

There can be no mistaking this truck for what it represents.

What is surprising, perhaps, is that it is a limited-edition: only 400 are to be built. (By the time you read this, they’re probably all gone.)

But here’s something that’s really surprising: earlier this week Lincoln announced that it is the “Official Luxury Vehicle of the Dallas Cowboys.”

Explained Kumar Galhorta, president, The Lincoln Motor Company, “Sponsoring ‘America’s Team’ makes sense. Football is about memories, about savoring the pleasure of the day and the game. And Lincoln is about creating warm, personally crafted experiences for its clients.”

Yes, the pickup trucks are one thing. But somehow the quiet, comfortable, sumptuous Lincolns are something else entirely.