While there seems to be an inevitable drive toward powertrains that are powered by batteries or hydrogen, Tim Jackson is confident that the internal combustion engine has a long run ahead of it, and not just because the installed base is so massive.
#Geely #LynkCo #Tenneco

Rather, Jackson, Executive Vice President, Technology, Strategy & Business Development, Tenneco, an $8.2-billion global supplier, says that by 2025 there will be clean air technologies for light vehicles that will actually cause the air coming out of the exhaust to be cleaner than the air taken in by the intake manifold.

Drive your car. Clean the air.

Tenneco has converters and particulate filters. Valves and exhaust systems. And a whole lot more.

While “clean air” products represent some 70% of Tenneco’s sales, the company has another important product line, “Ride Performance.” You may be familiar with one of its brands, Monroe. 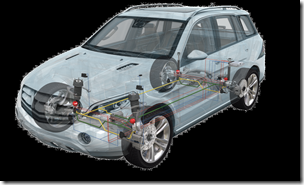 Yes, the company produces shocks and struts—last year it manufactured more than 90 million of them.

Jackson explains that the company is going beyond the traditional, conventional suspension components which has one fixed setting to handle road conditions, to an “intelligent system” that uses sensors on the chassis and steering system to provide real-time feedback such that the system can make adjustments as needed to provide what Jackson describes as being analogous to a train on smooth rails.

And he points out that as autonomous vehicles come to the fore, occupants who are, say, trying to type on their smartphones, will have an easier time of it, as there are the vibrations that exist in even the most capable current setups.

Jackson talks about Tenneco’s technology on this edition of “Autoline After Hours” with Autoline’s John McElroy, Joni Gray, editor-in-chief of Autobytel.com and me.

Jackson also discusses rally racing in northern Michigan (including the Sno*Drift in the Upper Peninsula) and why he owns four fire engines.

In addition to which, McElroy, Gray and I discuss Tesla’s new autonomous tech, the establishment of Lynk & Co., a new brand by Volvo owner Geely, and a whole lot more.

And you can watch it here: