The U.S. Postal Service is working with the University of Michigan on developing what’s being called an “Autonomous Rural Delivery Vehicle.”
#ZF #NVIDIA #supplier

The U.S. Postal Service is working with the University of Michigan on developing what’s being called an “Autonomous Rural Delivery Vehicle,” which, obviously, is being engineered to roll along rural routes with the postal person actually delivering the mail to the boxes while the truck drives itself. Word is that they’re looking to have this on the some 28,000 rural routes circa 2025.

Meanwhile, over in Germany, Deutsche Post DHL Group (DPDHL) has announced that it is going to have a test fleet of autonomous delivery trucks starting in 2018. 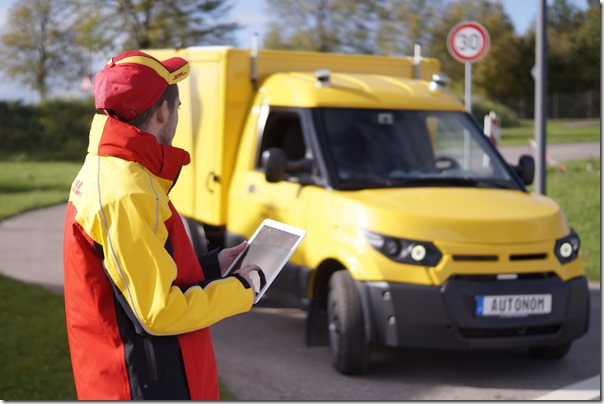 DPDHL has a fleet of 3,400 electric delivery vehicles, the StreetScooter, which can be fitted with the ZF ProAI self-driving system, which would be integrated with cameras, LiDAR, and radar. The ZF ProAI system is based on DRIVE PX tech from NVIDIA.

Explained Dr. Stefan Sommer, ZF CEO, “In its StreetScooter fleet, Deutsche Post DHL is taking its next step with our current and future generation of surround sensor technology and ZF ProAI artificial intelligence brain powered by NVIDIA. ZF ProAI is the brain between our autonomous driving sensor set to detect and understand the environment, and our motion control based on outstanding mechanical competence – the entire system follows our ‘see – think – act’ approach. In supply logistics and on the last mile where autonomous driving has tremendous benefits, goods can be delivered independent of the time of the day and delivery staff, with minimal noise and emissions, thus significantly reducing traffic congestion in city centers.”

The system is said to be able to plan a safe path, proceed along it, and then park itself.

According to Jürgen Gerdes, Member of the Board of Management at Deutsche Post AG, “Research and development of ecological, economical and efficient transportation will bring dramatic changes to the logistics industry.”