The Champs de Elysee is said to be the most famous boulevard in the world. Note that’s boulevard, not merely “street” or “road.”

It is the home to some of the swankiest boutiques in the world, as well.

In the event that between now (well, given that its Christmas, you’ll at least have to wait until tomorrow) and March 15 you happen to be strolling down the boulevard, you might want to stop in at number 136, which is “Peugeot Avenue Paris.” 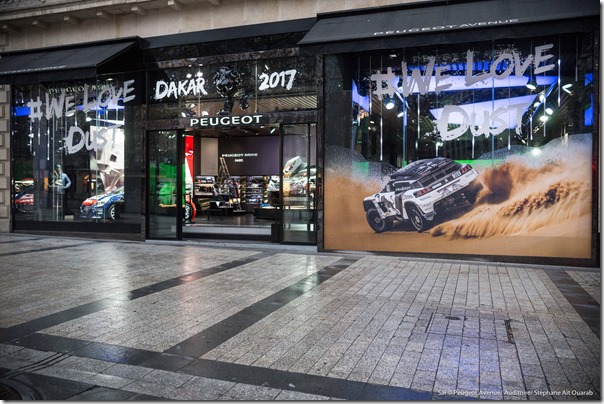 There the vehicle manufacturer is hosting a program titled “We Love Dust,” which is something that is rarely found on the Champs de Elysee.

As Peugeot is participating in the 2017 Dakar Rally, the company is using its Parisian boutique to show off the company’s off-road prowess.

There are two vehicles on display, a Peugeot 3008 DKR, a version of which is being run in South America, and a Peugeot 208 WRX, which will be participating in the World Rallycross Championship.

This is not just a static event, as there are things that the visitors can do. One is to sit behind the wheel of a Peugeot 2008 DKR and “drive” it in a rally environment. There are on-board cameras that film the exercise and the results are emailed to the “driver.”

Then there is the chance to put on a virtual reality headset and seem to be Sébastien Loeb’s co-driver in a Peugeot 3008 on various rally tracks.

But it is the dust that seems to be a bit, shall we say, outré on the Champs de Elysee.