“Why didn’t you make a diesel truck? Everyone else is doing it.”

That is what Robert Falck, CEO and founder of Einride, said he’s often heard since 2016 when the Stockholm, Sweden-based company was founded.

“The transport industry uses 11 million barrels of oil a day,” he said, noting that it represents about 7% of global CO2 emissions.

“By choice, we decided to make something different.” 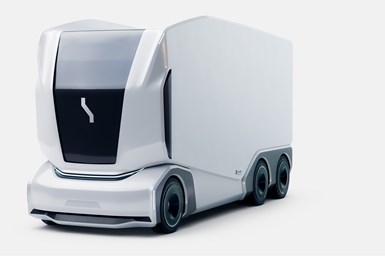 And so they developed the “Pod,” an “Autonomous Electric Transport” (AET) vehicle developed for commercial transport.

Falck admits that the Pod is not capable of doing everything that a standard truck can, but that it is applicable to performing the tasks done by from 20 to 30% being done in transport today.

Notably: with a solid business case for doing so.

According to Faulk, who was launching the new generation of Pods, which he said was redesigned with production requirements being taken into account, said that during the past four years the team at Einride weren’t just working on the Pod, but elements of a system that makes using it practical and economical to operate it.

Falck noted that legislation is one of the issues that has to be addressed in order to allow the trucks to operate on public roads. (Which is why present operations are AET 1, within closed facilities.)

No cab because this is an autonomous truck. And it is electric.

Among the launch partners that Einride is working with are Bridgestone and Northvolt.