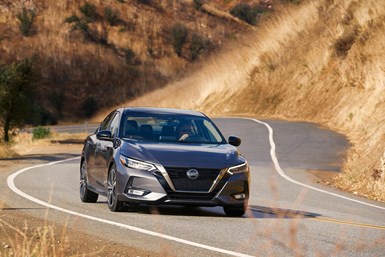 The 2020 Nissan Sentra has dynamic characteristics that go beyond the typical compact. (Images: Nissan)

So you think that if you want something above the entry-level S trim you’re going to pay through the proverbial nose. Yet the pricing won’t cause the sniffles: the SV has an MSRP of $20,270 and the top-trim SR $21,430.

This is a compact sedan that offers as standard things like Nissan Safety Shield 360, which packs in tech including automatic emergency braking, blind-spot warning, rear cross traffic alert and more.

It is a car with a striking design.

It is a car with a 2.0-liter engine that provides 149 hp, which is an improvement of 20% over the last generation Sentra. It has a continuously variable transmission (CVT) with shift logic that will make you think there’s a step-gear transmission under the hood.

And speaking of the hood, notice the sharp forms:

According to Thomas Mally, Associate Chief Vehicle Engineer, Nissan Technical Center North America, who was instrumental in the engineering of the new Sentra, that was a part that really pushed the capabilities of the team—and as he explains on this edition of “Autoline After Hours,” stretching is something that was fundamental to this sedan.

While those sticker prices might lead you to think, “Well, it is probably a good value”—and it is—it is far more than that, as it is a car that is certainly well executed, inside and out. For example, on the subject of the inside, WardsAuto named the Sentra to its list of 10 Best Interiors, and while on the subject of Wards, “Autoline’s” John McElroy and I are joined by Tom Murphy of Wards in talking with Mally all about the development of the vehicle.

It is worth noting that McElroy, Murphy and I, all having spent time behind the wheel of the Sentra, came away impressed with not only the interior but on the ride and handling of the vehicle.

As McElroy points out during the show, it is one thing to make a really good luxury car, but it is a whole lot tougher to do that for a vehicle with a significantly more modest MSRP.

Also on Autoline After Hours

Then the three of us discuss a variety of other subjects, including the price reductions of the Tesla Model S (in May a $5,000 cut, followed by a $3,000 reduction last week that was quickly followed by another so as to bring the sticker to $69,420); General Motors’ performance in China during the past few months (up 12%) v. in the U.S. during Q3 (down 10%); the spate of plug-in hybrid and battery electric vehicles in various parts of the world catching fire (Ford Kuga, Hyundai Kona EV, Chevy Volt EV); and a whole lot more.

You can watch the entirety of the program right here on "Autoline After Hours".