Now in its fourth generation, the Toyota Highlander just might be something that goes beyond continuous improvement
#Apple #HP #people

Given the preponderance of SUVs on the road and the number of Toyota Highlanders among them, it isn’t, perhaps, entirely surprising that the nameplate has been on the road since model year 2001. The first year it was on the market some 87,000 Highlanders were sold. As we roll the calendar forward, in 2019 there were some 230,000 Highlanders sold, representing 9 percent of all of the midsize crossovers on offer in the U.S. market—and given that there are 24 of them, that 9 percent of a 2.5-million unit segment is certainly non-trivial. 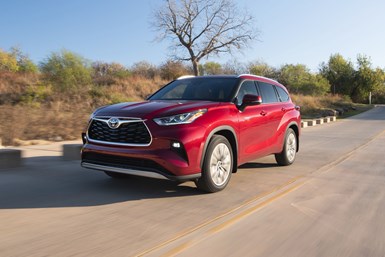 The 2020 Highlander is based on the Toyota global TNGA-K platform that also underpins vehicles including the Highlander’s sibling, the RAV4. (All images: Toyota)

If we go back in time, again, it was the 2006 Highlander that was first offered as a hybrid, part of the Toyota initiative to provide electrified offerings beyond the Prius. Toyota planners anticipate that in 2020 a full 20% of the take-rate for the Highlander will be the hybrid model—double the 10% achieved in 2019.

One of the reasons for this increase is undoubtedly based on the fact that the 2020 Highlander Hybrid is offered as a front-wheel-drive vehicle, not only as an AWD model as its predecessors are. This should expand the market for the vehicle as there are plenty of places throughout the U.S. where AWD is not particularly relevant, so by offering it as a FWD vehicle, Toyota is able to have a starting MSRP of $38,200 for the LE FWD hybrid.

The Highlander is offered with two powertrains: the gasoline model, comes with a 3.5-liter V6, which is a carryover from the third generation and the hybrid. The engine in the non-hybrid features dual overhead cams, dual variable valve timing with intelligence, start-stop functionality, and the ability to operate in the Atkinson Cycle for improving overall fuel efficiency, produces 295 hp @ 6,600 rpm and 263 lb-ft of torque @ 4,700 rpm. It is mated to an eight-speed automatic transmission.

The gasoline models come standard with FWD (as does the hybrid models), with AWD being offered on all five of the gas grades (and all four of the hybrid models). The AWD system available on the two top trim grades, the Limited and the Platinum, is a version of that first offered on the 2019 Toyota RAV4; it includes dynamic torque vectoring (which shifts more torque to the right or left rear wheel, depending on slippage conditions) and driveline disconnect, which, depending on road conditions (e.g., cruising down the highway), the AWD vehicle becomes FWD, thereby improving overall fuel efficiency by about 2 percent. The estimated combined fuel economy for the gasoline Highlander is 24 mpg; it is a combined 36 mpg for the hybrid version.

The hybrid powertrain features a 2.5-liter four-cylinder engine that produces 186 hp @ 6,000 rpm but when combined with the electric motors it has a system output of 243 hp, net. The torque is 175 lb-ft @ 4,400 rpm. For the AWD hybrid there are two electric motors for the front axle that supplement the engine (these motors were previously positioned in-line, but are now arranged coaxially on the transaxle) and a third motor at the rear. For the FWD version, the rear motor is eliminated. However, the total system output is the same because the nickel-metal-hydride battery pack is the element that controls the output and it is the same for both vehicles. The hybrid models feature an electronically controlled continuously variable transmission. The Highlander Hybrid has a total system output of 243 hp, whether it is in a front- or all-wheel drive version of the vehicle.

Yoshinori Futonagane is the deputy chief engineer for the Highlander, which essentially means that he was responsible for the engineering of the vehicle (i.e., there is a chief engineer who is responsible for all SUVs, with deputies being responsible for individual models, like the Highlander). One of the roles that he played at Toyota since joining the company in 1999 was advanced powertrain development for all Toyota vehicles. So when he talks about the Highlander, especially the hybrid version, he is very sensitive regarding the powertrain performance, such as when merging onto freeways, a case that he points out is common for U.S. drivers: “When you merge, you have to go from 0 to 60 or 70 mph”—realize that in many municipalities there is a metering system for getting onto a freeway that is controlled by red and green lights—“so we wanted to make sure that the hybrid system would be easy to use in that range. So when developing the hybrid system we had that in our heads conceptually so as to figure out what combination of engine and motors was best.” The AWD hybrid is capable of putting 80 percent of the torque to the rear.

The Highlander is based on a new platform, the Toyota TNGA-K, which is used for other vehicles in the company’s lineup, including the RAV4.

No Surprise. The 2020 Highlander is Bigger. Yoshinori Futonagane, deputy chief engineer for the Highlander, says that he and his team spent a significant amount of time learning how people actually use their midsize crossovers and what features they’re most interested in having in them.

The exterior design for the new Highlander was executed by Toyota in Japan; CALTY in Newport Beach, California, did the interior, and while the “chiseled” looks of the exterior may get someone to look, it is on what’s inside that will keep them in the vehicle.

The Highlander can accommodate seven or eight passengers, depending on whether there are captains’ chairs in the second row or it is a bench seat. Seating surface material options include woven cloth, Softex faux leather and actual leather trim.

The aforementioned increase in length went to the cargo area of the vehicle: behind the third row the volume is 16-cubic feet; it is 48.4 cubic feet with the second row folded and 84.3 cubic feet behind the front row.

And the interior dimension that will garner perhaps more attention than the number of people that can be carried or cubic feet of cargo hauled is 12.3 inches: the size—said to be segment-leading—of the multimedia head unit that is available on the top-trim version. However, while in this infotainment space it is worth mentioning that  Apple Car Play, Android Auto, Alexa In-Car compatibility, Waze, SiriusXM, and Wi-Fi connectivity are standard on all models.

The Highlander is available with a 12.3-inch screen, which is said to be best-in-category. As you can see, it provides plenty of information and is just a finger touch away.

Speaking of tech, the Highlander is equipped with Toyota Safety Sense 2.0, a suite of sensor-based systems. There is a pre-collision system with pedestrian detection that will engage automatic braking if a vehicle, pedestrian or bicyclist is detected and the driver isn’t responding to the warning. There is lane departure alert that uses a camera to detect lane markings and the electric steering system to make adjustments to keep the vehicle going where it should be. There is a radar-camera-based dynamic cruise control system. There is lane tracing assist, which works with the dynamic cruise to keep the vehicle centered in marked lanes and to react if unintended lane departures start to occur. There is road sign assist, which reads traffic signs (e.g., speed limit) and displays them on the multi-information screen. And there is the automatic high beam system, which controls the headlamps.

If we return to model year 2001 and then run forward to today, it is evident that the legendary “continuous improvement” that is part of the Toyota Production System is what has given rise to the 2020 Highlander. And maybe Futonagane and his team actually went beyond CI.