The second-generation sport sedan is designed and engineered to perform.
#chassis #Acura #Honda

Let’s think about the competitive set to begin with. The Audi A4. The BMW 3-Series. The Mercedes C-Class. So when Robert Ray, Engineering Design Development Leader for the 2021 Acura TLX, says, “The entry-level premium segment it tough,” he is not making an idle observation. There is a trio of cars that is well respected. “We needed a way to stand out,” he says. Which could be the definitional example of “understatement.”

“We found out we needed a personality,” he says. Which is something that is all-too readily overlooked by development teams who fail to take into account that in addition to buying sheet metal and leather, powertrains and paint, car buyers are looking for character.

But there is something that Ray also acknowledges of the journey to developing the second-generation sport sedan. The Acura Precision Concept. Introduced at the 2016 NAIAS, it was an inspiration for the ‘21 TLX.

In 2016 at the North American International Auto Show Acura unveiled the Acura Precision Concept, which was a design study meant to provide the direction for future Acura developments. “They’re never going to make that,” Ray says the reaction went.

At the 2019 Pebble Beach Concours d'Elegance Concept Lawn the Acura team displayed the Type S Concept. Again, the echo of “They’re never going to do that.” The Acura Type S Concept shown at Pebble Beach in 2019. Another big influence on the design of the actual ‘21 TLX.

And arguably, they have.

Speaking of the 2021 TLX Ray says, “My team worked tirelessly with out stylists in Los Angeles to get the car low and wide, to get elements of those concepts into our car.”

The point being that in order to get people to provide consideration to the TLX away from the likes of the A4 etc., this had to be something achieved with immediacy, not wooing.

They wanted to create a car that people would want to be seen in—and once behind the wheel with the ignition engaged and the 272-hp 2.0-liter turbocharged VTEC engine burbling, would immediately appreciate the dynamic performance that the car provides as they put the car into gear and engage the throttle. 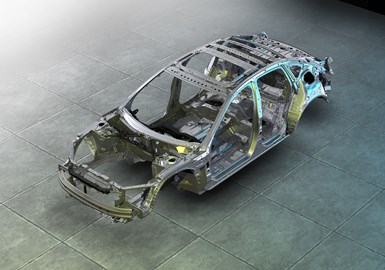 The structure of the TLX. Extensive use of advanced steels help make it much more torsionally rigid than the previous generation. The body structure is the most rigid on an Acura sedan, which helps provide dynamic performance.

The TLX features aluminum components, as well. For example, there are cast aluminum front shock tower mounts, a first for Acura. There is a cast aluminum front subframe (the rear is steel). The front double-wishbone suspension has forged aluminum lower wishbones; the upper wishbones are stamped steel; the lower damper forks and the steering knuckles are cast iron. The five-link rear suspension setup features two forged aluminum and three steel control arms. Aluminum is used for the front and rear bumper beams.

The hood is aluminum as are the front fenders.

All in, aluminum accounts for 7.6% of the TLX’s body weight. A laser brazing process joins the roof to the body side panels. The resultant surface doesn’t require a ditch molding, providing a clean, smooth look.

There is extensive use of structural adhesives. In total, 34.8 meters. Application areas include the front suspension towers, front side frames, rear side sills, A-, B- and C-pillars, roof panel, central roof arch, rear wheelhouses, rear floor pan, and lower rear unibody corners.

Like other Acura vehicles, the Advanced Compatibility Engineering (ACE) body structure is used to help with crash energy management. And the aforementioned center tunnel helps not only with improving torsional stiffness but with crash energy. It is attached to the lower dash. There are four advanced high-strength steel tunnel caps that extend from the lower dash rearward to a point past the front seats so oblique front crash loads are moved through the tunnel rather than into the footwell. (As there are rear-end crashes, as well, the energy goes from the bumper to the trunk floor and rear wheel wells to the side sills. That yellow object is the 12-bolt absorbed glass-mat battery that is located there rather than under the hood to help contribute to a front/rear weight distribution of 57/43.

A solid structure not only contributes to better handling and safety, but to a reduction in noise, vibration and harshness (NVH), as well. Think of all of that structural adhesive working together with various welds and you can imagine how solid the TLX is.

That said, there are still other types of noise. So there are various countermeasures taken to address it. This includes acoustic spray foam (e.g., at the base of the A-, B- and C-pillars; bottom of the windshield frame); high-density, sound-deadening “melt sheet” on sections of the floor; laminated acoustic glass for the windshield (a 2.0-mm thick outer of safety glass, a 0.7-mm middle laser of acoustic polyvinyl butyl and a 1.8-mm thick inner safety glass layer), and more.

Even the design of the wheels reduces noise by 5 to 10 dB in the 190 to 230 Hz range. There is a molded Helmholtz resonator in the groove inside the wheel rim that acts to minimize noise.

The TLX has a double-wishbone front suspension (top) and a five-link independent rear suspension (bottom).

Styling for the TLX was led by Acura Design in Torrance, California. Engineering development was performed by personnel at Honda R&D in Raymond, Ohio. Manufacturing the TLX in the Marysville Plant in Ohio.

Production of the TLX is being performed at Honda of America Manufacturing’s Marysville Auto Plant in Ohio.

The engines for the TLX—a 2.0-liter and a forthcoming 3.0-liter, both turbocharged—are and will be produced at the Honda engine plant in Anna, Ohio. The 10-speed automatic is built at the Honda facility in Tallapoosa, Georgia.

There will be a TLX Type S performance variant. It is scheduled to be introduced in Spring 2021. It will feature an all-new 3.0-liter DOHC turbocharged V6, which is being developed by engineers in Tochigi, Japan, with assistance from powertrain personnel in Ohio.  and will deploy the fourth-generation Super Handling All-Wheel Drive (SH-AWD) system.

What’s interesting to note is that the engineers working on the TLX development knew that the Type S was coming and that its performance capabilities would be far more demanding on the structure than any of the versions of the car that would precede it (i.e., TLX, TLX with Technology Package, TLX A-Spec, TLX Advance).

And as Jason Ray, Performance Development Leader for the car, puts it, “When we developed the new platform, we did it with Type S limit performance in mind. Our starting point was to have one body construction, so we developed the platform so as to be able to handle the Type S.”

So all of the aforementioned materials and adhesives and suspension setups were developed specifically with the Type S in mind, so everyone who gets a TLX that isn’t a Type S gets to benefit from that approach.

Which itself is a cause for Robert Ray’s “immediate ‘Wow!’”