When you’re making a new F-Series, you’ve got a lot riding on everything you do
#chassis #Ford #body

The best-selling pickup in the world for the last 10 years.

The highest-selling vehicle in the U.S. for the last 10 years.

Clearly Schmatz has a big job. An important job. And a job that he is passionate about. 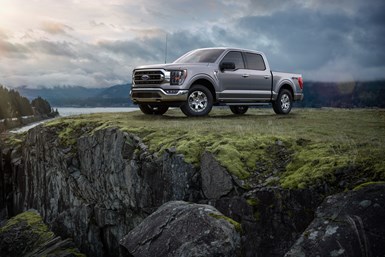 While it might seem like a marketing ploy to put an F-150 in such a commanding position in a photo, it really does have a commanding position in many ways, as a study by the Boston Consulting Group determined. For example, in 2019 Ford produced twice as many full-size pickups in the U.S. as any of its competitors. In terms of revenue, the F-Series in the U.S. is at $42-billion. If you combine the revenues of the NFL ($15-billion), MLB ($11-billion), NBA ($9-billion) and NHL ($5-billion), the sum is $2-billion short.

“One of the strengths of the Ford team,” he says, speaking of the colleagues that developed the new truck, “is that we know trucks, we drive trucks and we see the value in trucks.

“We spent a lot of time with customers when developing this truck, more than we ever had, just observing.

“I spent a weekend with a customer. A lot of the team members did, too. We wanted to see what people do with their trucks. What they struggle with. And what problems they may have—and not know they have.”

So by themselves being owners and by spending time with others who don’t work for Ford on the F-Series team, they developed a strong basis upon which to create this franchise vehicle.

One of the features that Schmatz is keen about is the 3.5-liter PowerBoost, a full-hybrid powertrain. While some might think “hybrid” and think “anemic,” he points out that this is the most powerful engine in the new F-150 lineup. 430 hp and 570 lb-ft of torque. 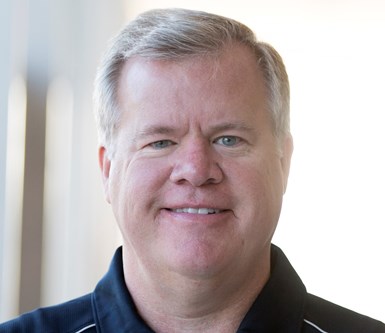 Chief engineer Craig Schmatz says that the F-150 team spent a lot of time with customers to determine how they use their trucks—and to determine the things that could be done to make improvements to the product. 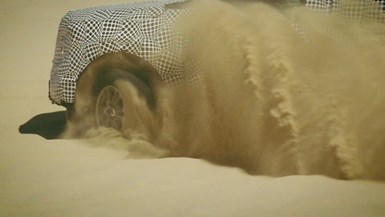 The PowerBoost—a hybrid powertrain—provides 430 hp, 570 lb-ft of torque and can tow 12,700 pounds. And it was tested under conditions like these in case anyone doesn’t think it is up to the task.

While the hybrid powertrain is new for the F-150, Schmatz explains that this isn’t something that they already hadn’t developed confidence in, as it is “nearly identical from a transmission perspective” to the setup first used in the 2020 Ford Explorer.

In the F-150 setup there is a 35-kW motor that is located between the 10-speed transmission and the 3.5-liter engine.

However, Schmatz says of the hybrid execution in the pickup, “We did our torture-testing to make sure that it is F-150 capable.”

Among the things that they did to prove the PowerBoost could handle what it would encounter (and then some) is run it up and down Davis Dam in the Mojave Desert: This is a 11.4-mile slope that climbs 3,500 feet with an average 6 percent grade. So they put 12,700 pounds on the back and drove up and down, up and down.

Another: They loaded the bed with 2,120 pounds and tested the truck on a specially prepared test course at the Ford Michigan providing grounds: The track, including nearly a quarter mile of metal-edged potholes of various configurations, is deemed to be too difficult for human drivers to endure, so they drove the loaded truck hundreds of times on the Silver Creek track with a robot behind the wheel. Yes, there is a large center screen: up to 12 inches. Shown on this one, for example, is the available Pro Trailer Backup Assist, which makes backing up a trailer a feat of turning a knob. While on the subject of tech, the F-150 offers standard over-the-air update capability, with the ability to add functions and features and to do things like provide software updates without needing to leave one’s own garage. The updates are generally quick—on the order of just a couple minutes—and can be performed when the owner wants them to happen.

Another: They constructed a multi-axis hydraulically actuated test machine to prove out the 1.5-kW hour lithium-ion battery. This machine shook the battery repeatedly. In 82 hours on the rig the battery experienced 10 years of running on washboard roads and potholes.

And know that PowerBoost F-150s had to undergo all of the testing that the conventional vehicles did, too, the salt baths and humidity chambers and frozen tundras and southeast Michigan streets. . . .

One of the things that Schmatz and his team discovered (or knew from their own experiences) is that oftentimes there is a need for power whether it is on a job site or during tailgating. So one of the things they developed for the 2021 F-150 is the “Pro Power Onboard” system, which is standard on the PowerBoost-equipped truck and optional on the vehicles with the 2.7-liter EcoBoost V6 and the V8. In the PowerBoost models, there is a standard 2.4-kW output (optional 7.2 kW) that is available through four cargo bed-mounted 120-V, 20 amp outlets (in the cab, too); for the trucks with the 7.2-kW option, there is a 240-V, 30-amp outlet. Some pickup trucks have tailgates that are origami-like in execution. Not the F-150. But what’s interesting is that (a) all trims have clamp pockets on the tailgates for purposes of locating work and (b) an optional Tailgate Work Surface provides rulers molded into the surface, a mobile device holder, cupholder and pencil holder, such that the tailgate functions as a workbench.

“If somebody needs power at the back of their truck it’s a game changer,” he says.

“When we designed the interior, we wanted to make sure that it was ‘function first,’” Schmatz says. When you need power, there’s no need for a separate generator. The PowerBoost-equipped F-150 (the hybrid version) comes standard with 2.4-kW of output or an optional 7.2 kW. Not only is the power available when at a job site, but can be used to charge tool batteries while driving from one site to another.

So there are screens in the center of the instrument panel: an 8-inch touch screen for the XL and XLT standard trims; a 12-inch screen, landscape orientation, for the XLT high series and above. There is a 12-inch digital gauge cluster in front of the driver that provides an array of information, graphics and animations, information ranging from what drive mode the vehicle is in, to navigation instructions.

But those are the sorts of things that one might expect, and they went well beyond the expected.

There is the optional “Interior Work Surface.” Schmatz says that people like to do work in their trucks—such as operating a laptop—and to eat in them, as well. So they’ve developed a system for the center console (and it is a BIG center console) that brings to mind the folding tray table on an airplane. While there is a lot of real estate, there isn’t enough for what they wanted.

F-150 drivers, Schmatz says, like to have a console-mounted shifter. Which meant that the shifter would be in the way of that work/dining surface.

It is a shift-by-wire system. So they were able to arrange it such that with a pushbutton the shifter folds flat so that the work surface can go in that space. Once whatever activity is done, the work surface is folded away and the shifter is brought back into position. Craig Schmatz says that one of the things they determined while observing how customers use their trucks is that they could use more space when it comes to doing things in the front seat, whether that thing is working or eating. So they’ve devised the
“Interior Work Surface,” which provides additional space. If you look closely, you’ll notice that the surface is over the space where the shift lever normally would be. It folds flat for purposes of achieving more space.

And then there is the issue of catching some winks.

Offered on the King Ranch, Platinum and Limited models there are “Max Recline Seats” for the driver and the passenger.

Again, think of the kind of seats that are found in first class on an airliner. The seats recline nearly 180 degrees, and Schmatz points out that the cushions are oriented so that there isn’t a gap that might disturb one’s nap.

“We just watched our customers and how they use their trucks. They spend a lot of time in them. We wanted to help them.”

Like the previous-generation F-150, the 2021 has aluminum exterior body panels. “We made that big bet in 2015,” Schmatz says. “It has worked for us.” The fully boxed frame is steel.

One of the interesting material deployment is actually found on the inside: “We’ve upgraded our materials throughout the range, from the XL up.” And when you get to the top-of-the-line Limited, not only is there seeming acres of leather, but a suede headliner and even actual carbon fiber trim.

Yes, in a pickup.

The F-150 is built in two—very productive—plants, the Dearborn Truck Plant in Dearborn, Michigan, and the Kansas City Assembly Plant in Claycomo, Missouri. And it goes without saying, given the massive sales of the truck, they’re very busy plants, too.