The Corvette and Camaro variants, of course, are engineered to have performance that blisters the tires even faster than the already performance-abundant models upon which they’re based.

And thus the Chevrolet Colorado ZR2, which was a concept in 2014, has come to reality. Reuss said of the truck upon its introduction: “You can go rock crawling on Saturday, desert running on Sunday, and comfortably drive to work on Monday.”

Among the equipment that provides the ZR2 with capability is the ELocker electronic braking differential supplied by Eaton. This unit is pushbutton activated: an electromagnet locks the differential to keep a single wheel from spinning. The driver can lock only the rear axle or the front and rear. Speaking of the system, Deborah Kullman, vice president/general manager, Chassis Driveline Controls, Eaton Vehicle Group, said, “Eaton designed this generation of ELocker technology to help deliver the most sophisticated four-wheel drive system in the mid-size truck segment.” She added, “The work to combine the software and controls logic from General Motors with the Eaton differential and actuator resulted in the design and development of a solution that satisfies the range of drivers who enjoy both on- and off-road experiences.”

Drive to the grocery store on Friday, take it out on the trails on Saturday.

Another enabler of its extremely capable performance is the use of dampers provided by Multimatic. The Dynamic Suspensions Spool Valve (DSSV) dampers used are position-sensitive. The aluminum body house two spool valves that provide compression and rebound damping for typical road conditions while a third, piston-mounted spool valve provides compression damping for off-road conditions. Also, there’s a separate rebound valve in the front dampers that is actuated when the suspension approaches full extension (think of climbing over a rock). 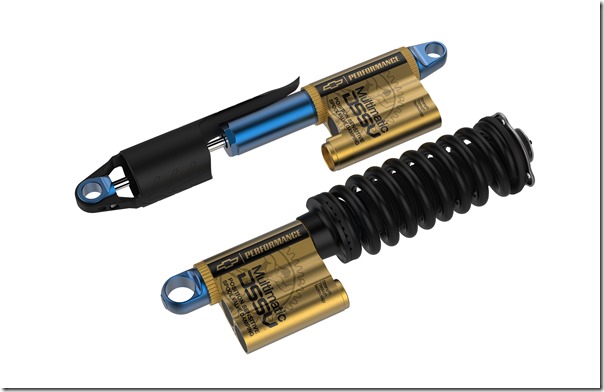 And not so it can go off-roading.