Through the third quarter of 2018 General Motor delivered 424,403 Chevrolet Silverados and 152,242 GMC Sierras, for a total of 576,645 pickups, which is a big number, but given that there is another quarter to go before the books are closed on 2018, the numbers are going to end up much, much higher. Just to get a sense of the magnitude of the Silverado sales alone, realize that during the first three quarters Cadillac delivered a total of 113,240 vehicles and Buick delivered 115,606, for a total of 228,846, which is well shy of the 424,403 figure. 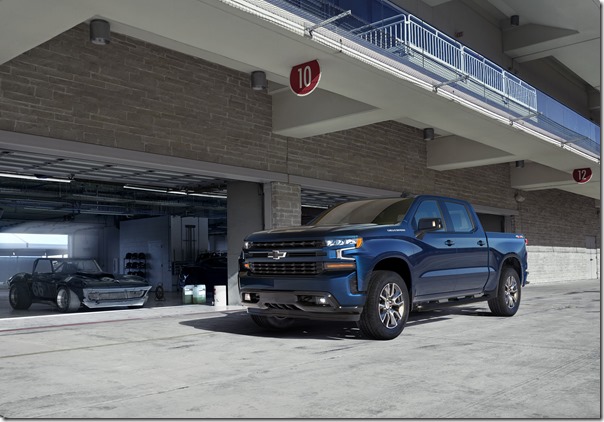 So to say that the Silverado is the “franchise” vehicle for GM is not to make an exaggeration, especially as there is the aforementioned Sierra as well as the likelihood that GM is going to be rolling out a number of other vehicles with the underlying architecture (e.g., think Cadillac Escalade).

Let’s talk about that truck. The 2019 Silverado is an all-new vehicle. It is bigger than the previous model, with an overall length up 1.6 inches from its predecessor. It has a cargo volume that’s increased through widening the width of the bed floor by nearly seven inches, accomplishing this by reengineering the way the rear fender inner and the box inner are arranged.

Yet the truck is as much as 450 pounds lighter than a comparable predecessor, something that is accomplished through the use of a mixed materials strategy. Rather than going with an all-aluminum body and steel frame like the Ford F-150, the Silverado features aluminum swing panels—as in doors, hood, tailgate—but the fixed panels—as in fenders, roof, bed—are steel.

And when it comes to steel, there are not only an array of grades that are deployed in the construction of the vehicle, but the processes used for the steels are also wide-ranging, including not only traditional stamping, but hydroforming, roll forming, and others, but the gauges of the steels, in many cases, change in a given component in order to achieve strength where it is needed and to minimize mass where it isn’t.

Tim Herrick is Full-Size Truck Chief Engineer, General Motors. Which means he was the person responsible for the massive team—he says that at any one time there were on the order of 10,000 people working on the development of the full-size truck—that developed the Silverado (and the Sierra and the derivatives).

On this edition of “Autoline After Hours” Herrick shares insights into both the development process, as well as the characteristics of the truck (he brought a Silverado High Country to the studio).

Then John, Bob and I discuss a variety of subjects, including FCA’s CEO Mike Manley telling Reuters that he wants to get the Ram pickup in the number-two sales position from the third place it has long held, the troubles at electric vehicle company Faraday Future, and a whole lot more, all of which you can see right here.