The chief engineer of what is claimed to be the “quickest, fastest and most-powerful mass-produced truck in the world” explains how they did it.
#chassis #Chevrolet #Ford

On August 18, the 2021 Ram 1500 TRX Launch Edition was opened for orders. In less than three hours, it was a sell out. There were 702 vehicles available. 702? That’s the amount of horsepower generated by the 6.2-liter supercharged HEMI V8 that is under the hood—a hood with a particularly capacious scoop in order to help provide that beast with air, because this is a half-ton pickup that has a top speed of 118 mph, so it needs a lot of air (the hood scoop is responsible for 50%). 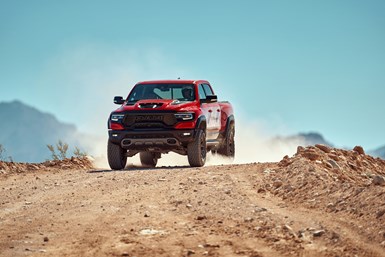 On this edition of “Autoline After Hours” we have Jeff Roselli joining us. Roselli’s title is “Model Responsible” for the TRX. Which, as he explains, pretty much means that he is the chief engineer for the truck.

When the Road Ends

Roselli has had experience at FCA working on muscle cars as well as Jeeps. And both of those learnings are combined in the TRX, as it is a vehicle that is engineered primarily to be operated in places—like deserts—where there tend not to be things like paved roads. And should it be the case that there just happens to be water in that off-road area, know that it has the ability to handle 32 inches of water fording. It has a ground clearance of 11.8 inches. It has an independent front suspension system that provides wheel travel (the TRX rides on 35-inch Goodyear Wrangler Territory 325/65/R18 All-Terrain tires) of more than 13 inches. 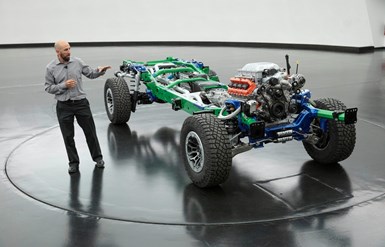 Roselli and what’s beneath the skin of the TRX.

Although the TRX is based on the Ram 1500, Roselli explains that they made significant changes to the vehicle, everything from making it dimensionally different (it is eight inches wider than the rest of the Ram 1500 lineup) to deploying 2.5-inch Bilstein Black Hawk e2 adaptive performance shocks. The frame for the TRX is 74% new. 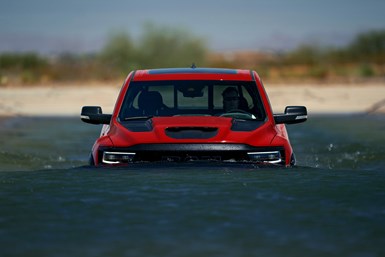 But Does “Normal” Things, Too

While Roselli says that the TRX was developed so that it could climb over rocks and go dashing across the desert, that they tested the truck under the most-demanding conditions they could find—and then created demanding conditions they couldn’t find at the company’s Arizona proving grounds—the TRX is a pickup that can do the things that pickups are expected to, like having a payload capacity of 1,310 pounds and a towing capacity of 8,100 pounds.

Roselli talks with “Autoline’s” John McElroy; Mark Williams, a freelance journalist who has deep knowledge of all things pickup, and me on the show.

And for the second half of the show, after Roselli is off the digital set, the truck talk continues. Obviously, the TRX is the FCA response to the Ford Raptor. But what is the response from GM going to be—if any. Williams suggests that the Chevy Colorado ZR2 is certainly in the game—Williams is big on the Multimatic DSSV position-sensitive dampers—but that is a midsize truck, whereas the Raptor and TRX are full-size.

Another part of the discussion is of the fundamental architecture of pickups and the expectations that pickup owners have for their trucks—even if those expectations are requirements that may be important once a year (e.g., someplace to put that load of mulch from the garden center or to carry a Christmas tree).

Williams, who is presently in London (though ordinarily lives in California) provides some perspective on the truck scene in the U.K. (whenever he sees small A-segment vehicles rolling along he says he thinks about how they’re what he might put in the bed of a pickup, assuming he could get the ramps right).

All that and a whole lot more. So click the name to see this edition of “Autoline After Hours.”