As has been pointed out many times (for example, this), one of the biggest hurdles—if not the biggest—for the acceptance of electric vehicles (EVs) is the lack of charging infrastructure, particularly as compared with the ubiquity of gas stations across the landscape, particularly in the U.S.

Let’s face it: the whole notion of “range anxiety,” which is typically reported by people when asked about their consideration of an EV, is predicated in large part by the fact that charging stations are limited in number and even though there are plugs everywhere, most of the time plugging into a 110-volt socket requires WAY too much time.

OEMs in Europe are meeting this challenge head on and doing so in a way that is eminently sensible and comparatively economical:

BMW Group, Daimler AG, Ford Motor, and the Volkswagen Group (including Audi and Porsche) have created a joint venture company that is charged with developing and implementing a high-power charging (HPC) network across Europe. 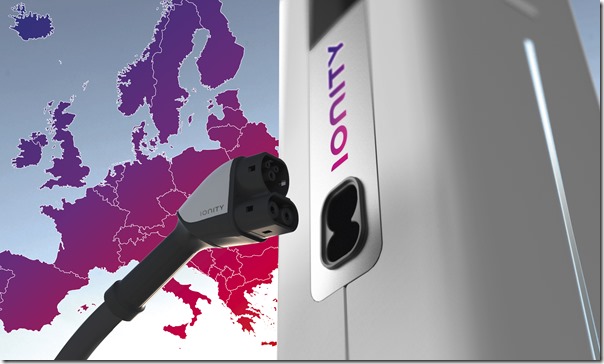 IONITY will be launching approximately 400 stations by 2020, using the Combined Charging System (CCS), a European standard, and providing a charging capacity of up to 350 kW, for faster charging. This approach is vehicle brand-agnostic.

The program is starting right away, with 20 stations planned for opening this year, located in Germany, Norway and Austria, spaced at approximately 120-km intervals. IONITY is partnering with existing service station providers, Tank & Rast, Circle K and OMV. Then there are plans for more than 100 station by the end of 2018.

As CEO Michael Hajesch puts it, “The first pan-European HPC network plays an essential role in establishing a market for electric vehicles. IONITY will deliver our common goal of providing customers with fast charging and digital payment capability, to facilitate long-distance travel.”

Each of the participating OEMs is an equal partner in the undertaking, and they are looking for more to join the network.

Here’s hoping that this is an idea that crosses the Atlantic sooner rather than later.