Although the news that Nikola has an order from Republic Services for 2,500 electric refuse vehicles with on-road testing “likely to begin in early 2022,” it is worth noting that Daimler Trucks presently has a fleet of its electric trucks on the road.

The fleet will being used by 14 different customers so as to capture different types of applications. 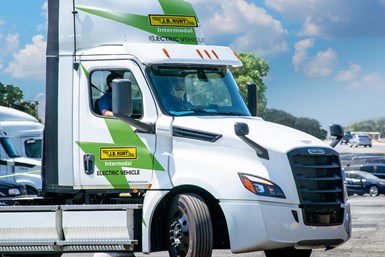 “J.B. Hunt is continually exploring innovative solutions such as the eCascadia to improve the sustainability of our fleet and operations,” said Craig Harper, executive vice president and chief operations officer at J.B. Hunt. (Image: J.B. Hunt)

The latest is J.B. Hunt Transport, which is using an eCascadia for a 120-mile intermodal haul for Walmart. J.B. Hunt will use the electric Class 8 in its fleet for three months in Los Angeles.

J.B. Hunt just announced that it made its first delivery with the eCascadia, so evidently the truck got the job done.

When the Class 8 eCascadia goes into production, it will have 730 peak horsepower. It will be fitted with batteries that provide 550 kWh usable capacity, providing a range of up to 250 miles. There will be the ability to charge up to 80% in approximately 90 minutes, thereby providing a range of about 200 miles. 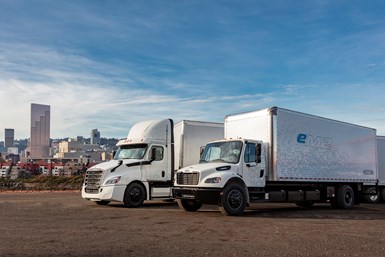 The eCascadia (left) and the eM2 (right): both are work trucks with fully electric powertrains. (Image: Daimler Trucks North America)

The medium-duty eM2, a local distribution vehicle (Class 6, with 26,000 pounds of gross combined weight rating (GCWR)), will have up to 480 peak horsepower. Its batteries will provide 325 kWh or usable capacity, providing a range of up to 230 miles. They can be rechanged up to 80% in an hour, which means a range of 184 miles.

According to Daimler Trucks North America, the eCascadia and the eM2 will have market launch in late 2021, so they’ll be on the road before the Nikola trucks.

It is worth noting that while there is a lot of attention paid to passenger vehicles with electric motors and batteries, the revenue play will undoubtedly be in commercial applications, where there is a more holistic view of cost of ownership/cost of operations.