Elon Musk was not the first CEO of Tesla; Martin Eberhard was (he was also the co-founder of Tesla, along with Marc Tarpenning). About five years after the establishment of Tesla, which occurred in 2003, Eberhard was no longer with the company.

Other activities and undertakings ensued.

By late 2017 Eberhard joined the Silicon Valley operation of Chongqing Sokon Industry Group (no, we hadn’t heard of it, either). The operation was named SF Motors. The objective was electric vehicles (EVs).

(Eberhard spent 10 months there. Presently he is at a startup, Tiveni, which is in the “intelligent EV battery systems” business. Apparently; its website is not particularly informative. Guess it might be need-to-know only.)

Anyway, this divagation into part of the career of Eberhard is to go to the point that Chongqing Sokon Industry Group seems to be a player in the EV space, something that’s underlined by the announcement from Dürr Group, a global expert in finishing systems and automation, that its seven-axis painting robot, the EcoRP E043i, is getting its world’s first application in the EV factory that Chongqing Sokon has built in Chongqing. Not just one of these robots. Thirty-six of them. 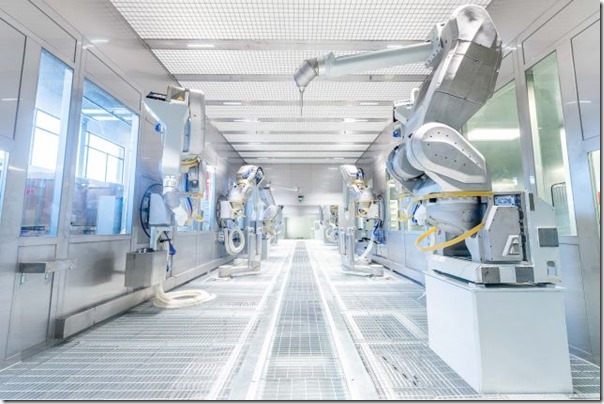 Inside Dürr-developed paint shop in China

(Seven axes? There is an additional joint that extends the robot’s work envelope such that it can reach into the interior of vehicles and it doesn’t need to be mounted on a horizontal rail in order to have an extended work area.)

The Chinese government wants the electrified vehicles market in that country to be on the order of two-million vehicles in 2019. Which is to say that companies there, even if they’re not widely known in the West, are deploying some advanced technology to achieve the production capability.