2020 will not be a good year for global EV sales, research firm predicts
#Volkswagen #Carbon #Ford

Although vehicle sales of all types are going to be hit hard due to the COVID-19 global pandemic, according to research from Wood Mackenzie, electric vehicles (EVs) are not only going to have reduced overall sales, but the pace of production launches of new EVs are going to be likely delayed by the change in the market. 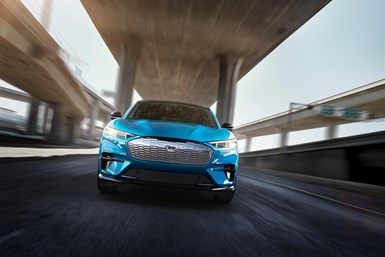 Even before the pandemic caused the collapse of vehicle sales of all types, OEMs were doing something unconventional regarding EVs. They announced vehicles that would be coming out well after the time of the announcement.

As Ram Chandrasekaran, Wood Mackenzie principal analyst, put it: “Ford introduced its Mustang Mach E in November 2019 but it won’t be widely available until H1 2021. Volkswagen has been promoting the ID.3 for several years but isn’t expected to starting selling the model until later this year. General Motors celebrated an ‘EV Day’ on March 4th to tout its readiness for the transition to electric vehicles, however, none of its new products are going to be available until late 2021.”

Then there is an additional factor: The question of what consumers will do in the next several months.

“From a consumer’s perspective,” Chandrasekaran said, “it makes perfect sense to wait longer for these models. After all, a car purchase is a large financial investment that lasts several years. Unfortunately, for EV adoption, this is likely to lead to a plateauing of sales in the near term. While the pent-up demand from the pandemic will help a bounce back in sales later in the year, new demand growth will lack until 2021.”

But Chandrasekaran said that he thinks that the global OEMs will stick with their EV efforts: “Despite the potential delays in EV adoption, several automakers have expressed a desire to be carbon neutral due to government policies and a change in investor attitude.

“The shift towards sustainability is the driving force behind the electrification of transport. Uncertainty caused by the oil price war and global catastrophes will only serve to strengthen that resolve, not deter it.”