The Sarcos Guardian XO Max full-body, all-electric exoskeleton features strength amplification of up to 20 to 1, making 200 pounds—the suit’s upper limit—feel like 10 pounds for the user.

Exoskeletons are powered, wearable devices that augment a worker’s strength. According to Sarcos Robotics, it has developed practical solutions to the challenges of powering and controlling such a device. 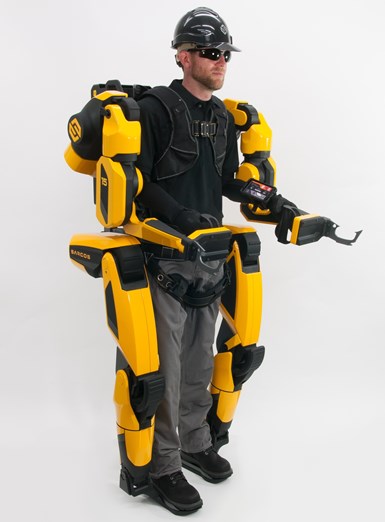 The Guardian XO Max electric, full-body exoskeleton makes a hundred-pound object seem as light as five pounds. It can run for eight hours on a single charge.

The Sarcos Guardian XO Max is a full-body, all-electric exoskeleton that features strength amplification of up to 20 to 1, making 200 pounds—the suit’s upper limit—feel like 10 pounds for the user. The suit transfers its own weight and the weight of the payload to the ground rather than to the user’s back and limbs. (Occupational back injuries cost U.S. employers more than $100-billion annually, the company notes.)

That takes power—but not as much as you might think. Through innovations in optimizing its power usage, “Sarcos has been able to do what no other robotics company in the world has been able to do—power a human-scale robot doing meaningful work for up to eight hours on a single charge,” claims Sarcos CEO Ben Wolff. And while the system is in use, its battery can be “hot-swapped” within seconds without a loss of power.

The control system uses sensors deployed at contact points with the human user—but notably they reside in the suit, as opposed to needing to be attached to the user’s body. That fact enables the user to get in and out of the exoskeleton in under a minute.

More significantly, according to Wolff, the control system responds to the user’s movements in milliseconds, with no discernable lag between human and machine motion. This allows for instinctive use and fast mastery of the exoskeleton, with minimal need for training.

Wolff expects the Guardian XO Max to be released commercially at the end of 2019.