Fritz Studer AG has been producing grinding machines since 1912. During that time the Swiss firm has produced more than 24,000 of them. So when it redesigned two of its universal grinders—the S31 and the S33—it went at the task so as to increase the capabilities and productivity of both. 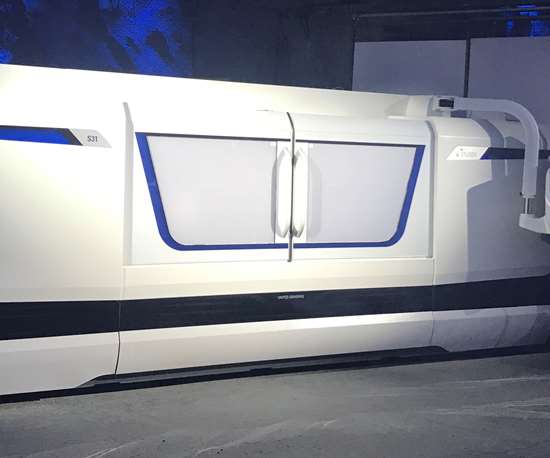 The newly redesigned Studer S31 for grinding workpieces in individual, small-batch and high-volume production, as revealed at the Hagerbach Test Gallery in Switzerland.

The Studer S33 for grinding medium-sized workpieces in individual and batch production, as revealed at Hagerbach Test Gallery in March 2019.

The S33’s B-axis has an automatic 1-degree Hirth coupling with a swivel range of -30 degrees to +210 degrees.

Fritz Studer AG (studer.com) has been producing grinding machines since 1912. During that time the Swiss firm has produced more than 24,000 of them. So when it redesigned two of its universal grinders—the S31 and the S33—it went at the task so as to increase the capabilities and productivity of both.

For example, the S31—a cylindrical grinder designed for producing workpieces in individual, small-batch and high-volume production—now offers four distances between centers (from 15.6 to 62.9 in.), compared to the two of the previous version. That’s the same approach taken for the S33—designed for individual and batch production of medium-sized workpieces. Both machines have a maximum 330.6-lb. workpiece capacity.

Both machines also have a longer X-axis stroke of 14.56 inches, which enables additional wheelhead variants. Machine column geometry has been redesigned and temperature control has been added to the column to improve dynamic and thermal stability.

The double T-slot of the Z-axis for dressing tools, in combination with the Studer Quick-Set software for grinding wheel alignment, reduces the complexity of setup and machine resetting for both models, according to Studer chief science officer Sandro Bottazzo.

Other common facets of the two machines are inclusion of the The StuderTechnology system, which integrates a powerful compendium of quickly deployed grinding expertise into the controls. Based on a few inputs, StuderTechnology automatically calculates optimal grinding parameters in a matter of seconds, according to Bottazzo. And both machines can be easily automated for series production through a standardized loader interface.

Here are some of the ways the models differ: The S33 has a new wheelhead design that can be equipped with a motor spindle for external grinding and a high-frequency spindle for internal grinding in different configurations. It also features three grinding wheels to ensure that the workpiece is machined more individually and quickly than with only two.

The S33’s B-axis has an automatic 1-degree Hirth coupling with a swivel range of -30 degrees to +210 degrees for as many as two outer diameter (OD) grinding wheels and one inner diameter (ID) grinding spindle for complex tasks. A fixed wheelhead enables swivel positions of 0, 15 and 30 degrees, offering additional flexibility for straight and angular plunge grinding in one machine. The maximum workpiece weight is 330 lb.

The S31 includes StuderGuide guideways with damping capability in the direction of movement. The guideway system uses the advantages of hydrostatic and hydrodynamic guide systems to avoid a slip-stick effect or floating of the slide.

For high-precision form grinding with its FANUC 31i-B control system, the S31 features a workhead with a direct measuring system and the StuderFormHSM form grinding software program that simplifies the grinding of curves.