Scion's vp Jim Farley talks about the seemingly quirky brand that has made some in the industry who were initially shaking their heads in disbelief to look wide-eyed at the sales that are being racked up.
#MINI #Scion #Toyota 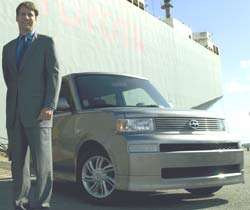 Jim Farley, vice president of Scion, started with Toyoda's strategic planning department in 1990. Since then, among other jobs, he's been a product planner for both Lexus products and for Toyota trucks, and worked in Europe as the general manager of product management.

Standing in the Scion booth at the annual SEMA rave of vehicles, parts and accessories—where there are more tattoos per square inch of skin than there is anything else in the Las Vegas Convention Center other than (1) tricked out whips of all shapes, sizes and vintages (the H2’s dominance of last year's event hasn't really been replaced by the Next New Thing, with both Dodge Magnum and Ford Mustang taking their share of slamming, but even Mini gets the treated attention) or (2) eye-boggling quantities of sculpted silicone in the area where the tires and wheels are ogled—Jim Farley is wearing a coat and tie. Which evinces the seriousness of this undertaking unveiled by Toyota Motor Sales in 2002. He's standing next to an xB while a nearby tC gets its share of admiring stares. Farley is head of Scion, the little car company that can. What can it do? Well, consider this: "We have pure price, not negotiated price." The people who roll into Scion dealerships, which are housed within Toyota stores, do not want to meet Monty Hall's nephew. But here's the kicker: "We've been on sale in California for 15 months, and our cars are still selling at roughly MSRP and with zero incentives." Oh, and one more thing: "The average small car incentive we compete against is $2,000 cash." So, while others are trying to appeal to Gen Y by, well, buying their business, Scions, which have base MSRPs (with manual trannies) of $14,195 for the xB and $16,465 for the tC, are presumably being purchased by people who want them. Which seems to be a more radical notion for some of the Detroit builders than, well, some of the people who are (wo)manning the booths surrounding Farley, who aren't wearing ties or much else, for that matter.

Here's something that's perhaps even more startling than the notable performance that's being turned in by Scion. The business plan wasn't written by Leonardo di Caprio's character in Titanic, with pretensions of global dominance. Farley says, "The magic of Scion is its uniqueness. If we sell 300,000 units, it's not Scion any more." Perhaps they can do that because they are selling cars and making money on them (according to Masaki Sanayama, assistant chief engineer and project manager, Toyota Technical Center, the Toyota way of determining price is to start with a price that is calculated to be acceptable to the market, then to subtract the cost of producing the product; the remainder is the profit). But that's just a supposition. In point of fact, Farley acknowledges, "At Scion, obviously, we have freedom because we"—as in "Toyota Motor Corporation"—"sell 400,000 Camrys." The profitability and capability of the parent company allows Farley to say, "100,000 to 200,000 annual units is our business model. Anything below or above that changes it dramatically." And while Scion is about change, it isn't about following the road to expansion that car company executives tend to dream about, change as in having an extensive line-up. "Brands like ours don't want to sell a million units."

But it's not about having a free pass from the Powers That Are in Toyota City. Hardly. Farley still has to make a credible business out of Scion. There's plenty of pressure. One source of the pressure is the dealer body, which was told from the get-go about the non-negotiated price approach, and which now is looking at a lineup that consists of three vehicles. "If you have dealers," Farley says, "you have full-line pressure." He acknowledges that they are internally discussing the possibility of expanding the franchise, but goes on to say, "It's important for us to quickly develop 'catcher' products in Toyota and Lexus that are attractive to an xB or a tC owner." Word is, those products that may be able to receive those of Gen Y moving on are coming. And with good reason. Farley notes that in just a decade, today's xB or tC buyer will represent about 40% of the market. Is there a car company that can afford to overlook that?

There is pressure from the competition, as well. There's Smart on its way to the U.S. from DCX. There are the BMW 2-Series and the Audi A3. Farley describes Nissan as "a natural competitor for Scion" ("They already have a good following in the urban market"—and the urban market is the one that Scion is pursuing with all manner of non-trad promotional activities that would probably cause other people in executive automotive suites to have a gripper: It's one thing to use pop tunes behind your TV ads and entirely another thing to put on organized bashes celebrating music, art and, well, tricked-out rides.).

Farley acknowledges another advantage of being part of Toyota: the capability to perform body engineering, which, he says allows them to have "unique silhouettes." "We have probably 50 body types in Japan. The Europeans' complexity is on the powertrain side and on the feature side. Our complexity is the body type. Look at the [Toyota] RAV4 and the [Lexus] RX—we've been handsomely rewarded for silhouette innovation, being the first one in the market where we've innovated a silhouette. Scion has an element of that." He suggests that the engineers working on Scion are as invigorated by the possibilities that the brand represents as, well, perhaps the people at SEMA thinking about modifying their potential rides.

"It's a matter of getting the resources," Farley admits. Both Toyota and Lexus are undergoing a raft of new vehicles, so Scion has to work to get its degree of support. "It's tough. You make this kind of experiment and once in a while it's not going to work. We have to look that possibility right in the eye. But it's a bigger risk not to try."

Farley On The Competition

Scion's Jim Farley is convinced that the vehicles that will succeed in the market are those that seem exclusive, or which readily lend themselves to customization so that they will, in fact, become special. He cites three recent vehicles as an example of what he's talking about. "The [Ford] Five Hundred wasn't designed to be speced out. The whole design doesn't ask you, as a consumer, 'Please, customize me.' A [Chrysler] 300 or a [Dodge] Magnum does. Some base designs, especially for brands that want a premium mainstream image, have to have that in their designs."

He admires the Mazda3. He says the five-door version of the Mazda3 is one of the most cross-shopped vehicles with the Scion tC coupe. He speculates of the Mazda3 development, "If you would have been a traditional product planner doing cafeteria product planning, going through the cafeteria, you wouldn't have picked that car. Someone at the company said, 'We can't compete anymore doing that, not as a Corolla competitor. We have to find some unique way of differentiating ourselves because we're Zoom-Zoom.' I think they did a really good job of executing that product."

He thinks that with Nissan's "good following in the urban market," it "is really a natural competitor for Scion." He says that the Hyundai Tiburon is a "great package," and that they, too, "have a very loyal following."

"We will have a lot of competitors because more and more products are going to come out that will look like the xB and tC. But the question we have to ask is: 'Is that enough?' We tried to sell MR2, Celica and Echo under the Toyota badge, and we had a pretty cool marketing program—and it didn't work."