A truck like the Super Duty is a purpose-built tool. And the purpose of the 2011 model is to work hard, which is made possible by some serious engineering.
#Bosch #engineer #Honeywell 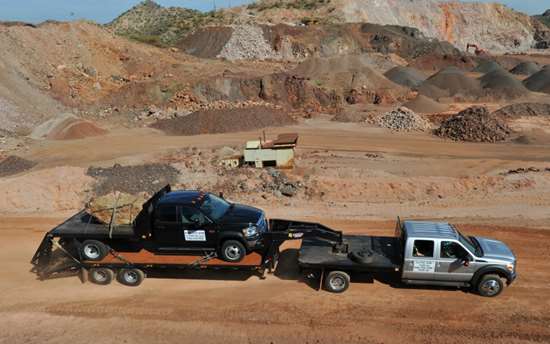 The F-550 has a 35,000-lb. GCWR. Clearly, there is serious powertrain and chassis engineering to make that happen.

Trailering is facilitated by a Tow Haul mode that uses sensors to determine when downshifting for engine braking should occur.

The Super Duty is equipped with a new six-speed transmission that was engineered so that it can accommodate both the gas- and diesel-powered engines.

The 6.7-liter turbo diesel is not only engineered for performance, but to run as quietly as a diesel found under the hood of a European luxury sedan.

A truck as a technological tour-de-force?

That, arguably, is what the 2011 Ford Super Duty is, particularly with regard to its powertrain. The design, development and engineering team clearly identified that when it comes to a line of trucks—the F-250, 350, 450, and 550—that will be used not merely as means of trans-portation but as machinery used to do serious work, they had to go further than merely providing the superficial sorts of features that are fully sufficient for most pickups. One glance at the grille—which appears to be a vise unsuccessfully trying to compress the Ford Blue Oval—indicates that it is a truck built for professionals. Serious professionals.

A big story is found under the inverted power dome hood. As Brad Richards, exterior design manager put it, "The Super Duty is all about power and capability, and we wanted to make that obvious." And that hood is nothing if not obvious. Beneath the sheet metal is either a 6.7-liter Power Stroke turbocharged diesel or a 6.2-liter gasoline engine, both new. And the engines are mated to an all-new transmission, the 6R140 heavy-duty TorqShift six-speed.

Before looking at the engines, it is worth noting that developing a transmission that can readily handle the characteristics of both a diesel and a gas engine is no mean feat. That is, the diesel is characterized by low-rpm torque and the gas engine has higher rpms. The transmission is designed with a Lepelleiter-style power flow that helps reduce complexity in the connection between the gear sets and the clutches: there are just five clutches for the six-speed transmission. System efficiency is improved by keeping the speeds of the clutches relative to one another low. Because the diesel provides 735 lb-ft of torque, a powder-metal carrier—consisting of four powder-metal components sinter-brazed into a single rigid structure—is used in the compound Ravigneaux planetary gear set. The carrier helps accommodate both the requirements of the diesel and gasoline engines.

The transmission offers full automatic operation of manual selection of the gears. Within the "SelectShift" mode there is what is called "Progressive Range Select." This is useful when operating with heavy loads, because when the driver selects it, the use of the upper gear range can be limited. There is also Tow Haul mode which, as in cases of going down a grade with a heavy trailer attached, uses sensors to predict when downshifting for engine braking should occur.

The transmission's torque converter features a long-travel, high-capacity turbine damper that dampens the torsional force produced by the diesel, in particular, and according to Al Bruck, 6R140 engineering manager, "Allows us to lug down to 900 rpm while our competitors lug to around 1,100 rpm. This technology allows us to stay locked more, which means the engine can run at lower rpm and get better fuel economy."

The transmission is being produced at the Ford Sharonville Transmission Plant in Ohio.

Mike Harrison, Ford V8 Engine program manager, is a racing enthusiast. Harrison, who was born in England, is keen on rally driving, a type of racing that is predicated on both speed and endurance. And that sort of thinking was applied to the gas engine develop-ment for the Super Duty: "Our all-new 6.2-liter V8 engine uses race-proven components and technology that have been optimized for the high-perform-ance and efficiency that our Super Duty customers demand. It delivers not only significantly better horsepower and torque"—385 hp and 405 lb-ft.—"than current heavy-duty gas engines, but also improved fuel economy."

A key characteristic of the engine is the large 105-mm bore and short 95-mm stroke. The former facilitates the use of bigger intake and exhaust valves for better combustion conditions. The latter results in higher speeds for higher horsepower (although it is worth noting that the 385 hp is reached at 5,500 rpm).

According to Harrison, extensive computer-aided engineering was used to develop the engine. How well this worked can be discerned from the results of the extensive physical testing performed. Speaking of the outcome of putting more than 50 engines through all manner of testing in the dyno lab, Bob DeBona, supervisor, Ford Engine Performance and Development, said: "The precision that went into the engineering and manufacturing of this engine led to very few tweaks to the block during development. Components such as the crank, connecting rods, heads, and intake manifold stayed essentially the same throughout our durability testing, which is a testament to the reliability of this new engine. It's able to pound out the torque hour after hour, week after week, demonstrating extreme durability."

Heretofore, Ford had outsourced the diesel engine for the Super Duty. But for the 2011 truck it decided to design, engineer and make its own. "We integrated Ford's best global practices in engine design, development and testing as we pulled together our co-located team, which included engineering, design, manufacturing, and purchasing," said Adam Gryglak (a.k.a., "Dr. Diesel" within the Ford community) about the development of the engine that was code-named "Scorpion" (yes, after that band). He explained the importance of the team, "This helped us get the job done efficiently and quickly while increasing our focus on the product's capability, performance, quality, and reliability." The result is an engine that produces 390 hp @ 2,800 rpm and 735 lb-ft of torque @ 1,600 rpm.

Rather than using a standard approach to engine design, the 6.7-liter team actually came up with a radically different design. Instead of putting the exhaust manifolds on the outside of the compacted graphite-iron block, they are in the valley. The intake manifolds are on the outside. And the aluminum cylinder heads—which are capable of handling firing pressures of nearly 2,600 psi—are flipped compared to their location in standard diesel V8s.

This design is not only compact, which is valuable for packaging, but it also means that because the exhaust system is smaller by about 50%, the turbocharger, which is also located in the valley, is fed air faster, which leads to better throttle response. The Honeywell VNT (Variable Nozzle Turbine) DualBoost single-sequential turbocharger features two compressor wheels driven off of one turbine impeller. The consequences of this design are faster response time and the thrust of a larger turbocharger in a comparatively compact package.

NVH was an area of focus during engine development. So, for example, the turbocharger is bolted directly to the block, thereby attenuating the vibrations that can be set up through the exhaust system. Because there is a single turbo, the air-handling noises associated with two turbos are eliminated. Even the combustion was addressed. The engine uses a high-pressure Bosch direct-injection fuel system with piezo-injectors that operate at >29,000 psi. Each injector has eight holes to spray fuel into the cylinder; each cycle can have up to five injector events. They've devised an approach wherein fuel is injected before the piston reaches the top so the charge is heated up more than is ordinarily the case. "Then when the main injection occurs," said Gryglak, "we can mitigate NVH because we have a slower ignition process. When the fuel burns, it doesn't burn with a traditional pop or bang." And to complete the picture, there are specially designed engine covers to minimize the ticking sound associated with the injectors."

One of the interesting interior design features is a consequence of mounting the gearshift lever on the steering column: there is a massive console that runs from the instrument panel back to the backseat space. Not only does this console provide the capacity to store laptops and more in a lockable container, four cup holders, and more, but it also allows running two HVAC ducts to the rear seat.

One of the notable interior options is a 4.2-in. LCD screen positioned between the tachometer and the speedometer that is controlled by a five-way button on the steering wheel. The system not only allows the driver to obtain familiar information—from compass settings to fluid temperatures to fuel economy—but the system can be programmed so that settings related to individual trailers can be called up as required.

The Super Duty is a work truck. And it is engineered to work.